Recently there has been a number of minor incidents on the southern broder of Wittenberg with Saxe-Jarslberg (an ally of Monrovia). The corp of observation has mounted extra patrols, garrisons are on the alert and the local militia have been called up.

A representative of the Wittenberg army paymaster is on his way to one of the southern garrison towns with the pay for the troops. The spies of Saxe-Jarlsberg have learnt of this and the command staff have decided to capture the coach and take the money. They decide to intercept the paymaster at Oberstein. Oberstein is a supply relay point for the southern garrison towns, so if they miss the coach they have been ordered to take all the supplies and livestock they can find.

The forces of Saxe-Jarlsberg crossed the River Oudear at Vanderhof with a regiment of infantry (5 companies), a company of jagers and dragoons. Two companies of infantry hold the main river crossing while the rest move on to Oberstein, some of the dragoons are despatched on flanking patrols to watch out for Uhlans.

--oxo--
The local woodsman spots the approaching column and runs to Oberstein to warn them, the women and children take refuge in the church while the men decide to defend the supplies held in the barn. Riders are sent to get help, the church bell is rung to attract the attention of any nearby patrols.

The Saxe-Jarlsberg troops enter Oberstein, the dragoons race ahead as they are tasked with capturing the paymasters coach. Jagers ford the small river... 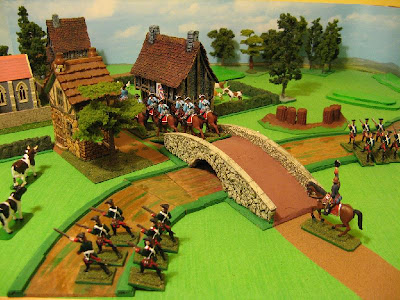 The rest of the column arrives and starts to cross the bridge. The dragoons are on the move and the two jager companies move forward, one towards the road and the other in the direction of the barn. 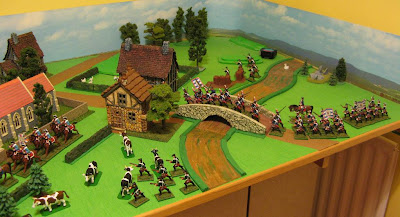 Hearing gun fire and seeing the dragoons on the edge of Oberstein the paymasters coach turns and heads back up the road, while their Uhlan escort moves closer to investigate. A jager patrol in the woods approaches having heard the church bells. 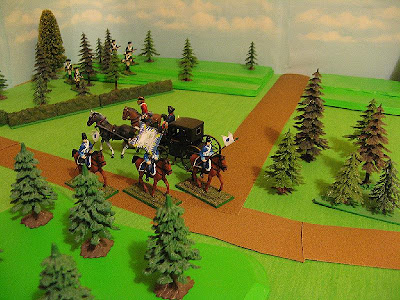 Meanwhile in the village one of the infantry companies has been held up by fire from the house by the bridge, the local highwayman Black Jack Davy who was hiding out there with some of his henchman opened fire (he has an intense dislike of the Monrovians and their allies). 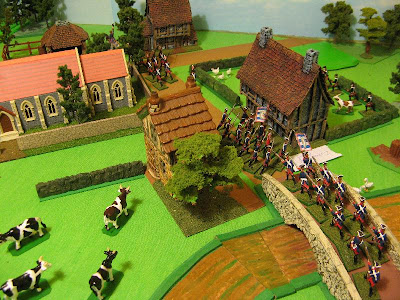 The Saxe-Jarlsberg dragoons try to catch-up with the coach. 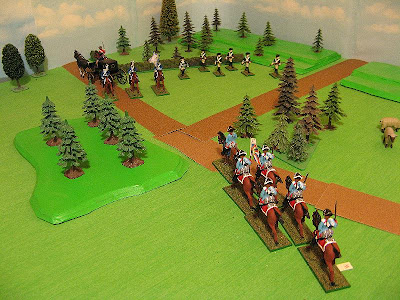 However they are too late and end up in a standoff, a local militia company has also arrived. Their position on the road keeps the Wittenberg troops away from Oberstein allowing time for the infantry to secure the town. 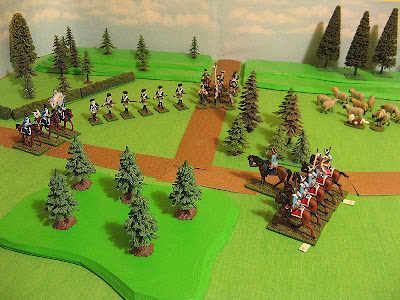 The leading grenadier company takes up position blocking the road to the nearest garrison town. A Wittenberg jager patrol, which arrived to investigate the bells ringing, has taken refuge in the woods where it is pinned down with fire from the Saxe-Jarlsberg grenadiers and jagers. 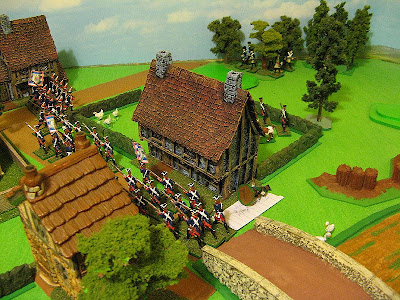 A detachment of jagers enter the house by the bridge and after a some desperate fighting have control. Black Jack Davy, seeing no troops nearby makes a run for it to the tavern across the street. 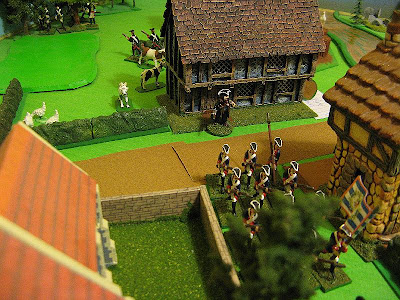 A company of militia and regulars arrive but find they are outnumbered, two more companies of Saxe-Jarslberg infantry are just entering Oberstein.. 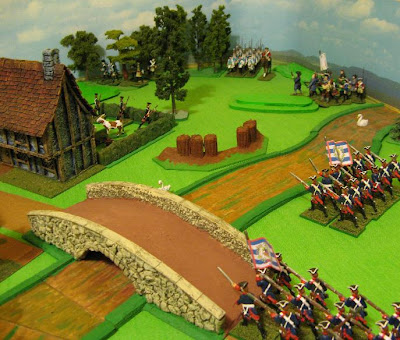 The Saxe-Jarlsberg troops now have control of the town, and set about trying to get into the barn for the supplies; the barn is resolutely defended by the locals... 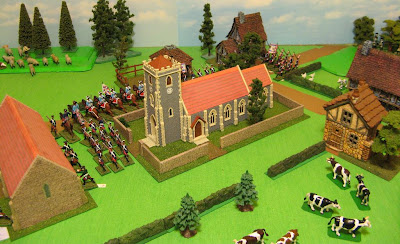 Wittenberg troops approach but hold back they have insufficent numbers to attack .. 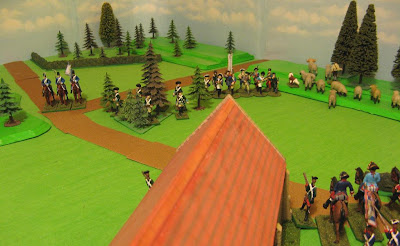 After having held the barn for some time, the locals give up and run as they see a full company of infantry preparing to storm the barn ... 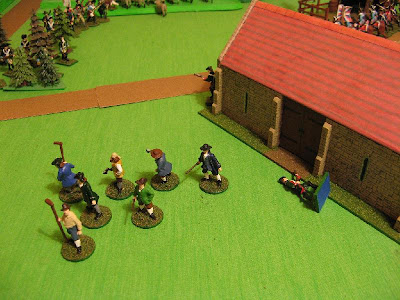 The Saxe-Jarlsberg troops start removing the supplies from the barns and get ready to round up any livestock. 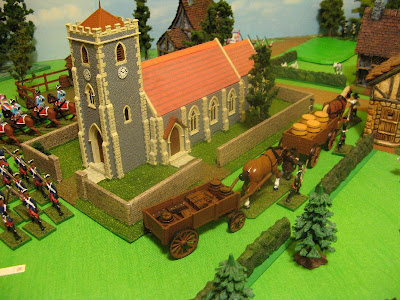 The Wittenberg troops have no choice but to let the enemy do what they like. They have insufficient forces to mount an attack on the town, besides which the local militia are not keen on advancing against such a large number of enemy regulars.
Posted by old-tidders at 01:02