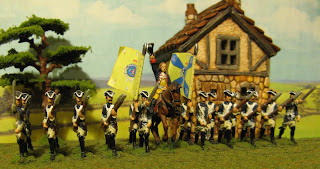 Figures are cast from Prince August molds except for the officer who is from Irregular Miniatures. House is made of pottery which I found at a car-boot sale for 50p.Next one planned is of a Reicharmee regiment.
Posted by old-tidders at 02:07 2 comments:

The enlarged household foot grenadier battalion is also on manouvres:

Rivers and other things ...

After a visit to the car boot sale yesterday, I came home with another pottery house to add to my scenics; a cutting mat and a boxful of about 20 dice (all for the princely sum of £3.50).

I've been trying to work out how to make some river sections for my next battle scenario. While tidying up to store my houses away I came across some self adhesive cork tiles - eureka ! idea for river sections:
- cut cork tile to width required
- remove backing;
- stick on some thin clear plastic painted on the reverse side with brown and green smudges
- add some river banks - paint and finish as required. 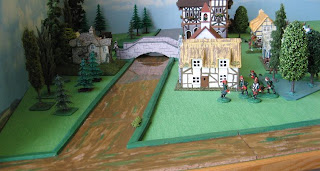 Close up of the bridge below. The border guard of the Duchy of Fenwick collect tolls to cross into the Kingdom of Wittenberg. 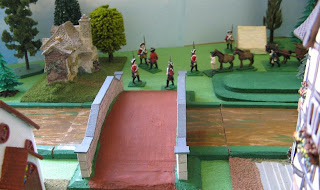 The forces of Wittenberg continue to mobilise; DR nr2 of the Boldovian army corp is seen here on exercises.

Some portraits of the King, Queen and two eldest children:

(a useful site for 18C art to use for blogs is at http://witcombe.sbc.edu/ARTH18thcentury.html#18century )
Posted by old-tidders at 04:41 4 comments:

The following scenario of a raid interception action was used as a play test of the "Weight of Fire" rules. This time we tried out a predominately cavalry scenario, with the inclusion of some artillery, to see how Cavalry Melee went.

King Leopold III of Wittenberg arrived at Zorfburg late in the evening. He had ridden there quickly and had not been able to gather any other troops on the way to assist him. At Zorfburg there was a company of Jagers and some artillery which had been sent to re-inforce the garrison. The King and his troops bedded down for the night. In the morning he arrayed what troops he had ready for action. The Wittenberg force:

3) Battle is Joined at Zorfburg

The Wittenberg scouts spot the Monrovians and ride back to warn the King ...

The Monrovians start to manouvre ...

King Leopold moves his force forward to block the Monrovians ...

The Wittenberg artillery fire on the Leib Dragoner disorganises them. The Monrovian dragoons rout and then try to rally, and the Garde Du corp reform to face the other dragoon regiment ...

The Leib Dragoner regiment charges home, the Gard Du Corp puts up a fight but they are exhausted, they break and rout ...

The Monrovians reform and try and complete their 'getaway'. At this moment the Wittenberg Prinz Leopold Dragoons arrive - they attack the rear Monrovian dragoon regiment... 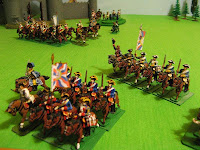 The Prinz Leopold Dragoons have cut the rear Monrovian dragoon regiment down to a man. The Wittenberg forces are disordered, tired and unable to pursue....

4) Afterwards
The Monrovians had got through, they kept the booty from the raid but lost half the Leib Dragoner regiment and Dragoon Regiment Nr 2 was wiped out.
About an hour later the Wittenberg Schwarze Dragoner arrive on the scene, the King ordered them to continue the pursuit. The remnants of the Garde Du Corp arrived back, with their colours intact - with some wounded all that was left was barely 1 company (50 men left, of about 250 that started the battle). The Prinz Leopold Dragoons had a few wounded but no signficiant losses.
The battlefield was cleared of the dead, the wounded being taken to Zorfburg. About 250 horses from the Monrovian dragoons were rounded up and the Monrovian dead stripped of useable equipment (carbines, swords etc). About 100 horses were dead or badly wounded, the wounded ones were shot and the inhabitants of Zorfburg feasted on horsemeat for the next few days ...
Posted by old-tidders at 02:38 1 comment: 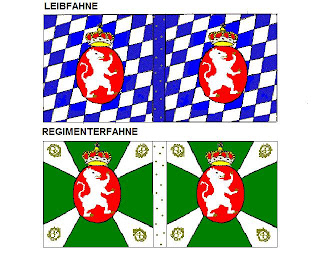 Wittenberg Corp of Observation on the march ... 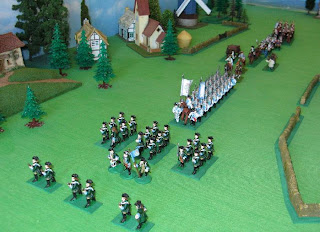 With Monorvia currently in the process of a military build up, Wittenberg has mobilised it's corp of observation. This is currently nearing its destination of Heidelheim in Upper Belgravia, which will be it's base of operations. With a large border to patrol they will soon be re-inforced with an extra regiment of dragoons or a pulk of Uhlans.
Posted by old-tidders at 05:22 1 comment:

[this is a preamble to a scenario for a second rules play test; more to follow ..]

After the abortive campaign which culminated in the 'drawn' Battle at Hummelsdorf and the successful rearguard action at Boltsdorf King Leopold III of Wittenberg dispersed the main body of his army on the border of the provinces of Upper Belgravia and Boldovia. He placed a corp of observation to monitor the border with Monrovia.

Meanwhile the Monrovians deciding that in order to keep the Wittenberg army off balance, while they reinforced and re-equipped their cavalry, that they would have to make some sort of raid on a key target. Having learnt from their spies that the magazine at Schwenk was lightly defended they dispatched a force of two regiments of dragoons to attack it and destroy as many supplies as possible.

The Monrovian dragoons crossed the border at night and managed to slip past the Wittenberg corp of observation; travelling by the 'back roads' they managed to reach Schwenk un-detected. They quickly brushed aside a company of garrison infantry and set about destroying the magazine.

After finishing their destructive activities the Monrovians moved off quickly, taking some booty with them. A small patrol of Uhlans saw them leave and notified the commander of the nearby 'Schwarze Dragoner' regiment, who rowsed his troopers and set off in pursuit; however he missed them and found their trail about half a day later. The Monrovians moved as fast as they could manage - their commander decided to take the quickest route back, down the Zorf valley close by the town of Zorfburg, accepting the risk that he might be intercepted; but gambling on his mobility and the chances of the Wittenberg army not being able to concentrate their forces quickly enough.

King Leopold III flew into a furious rage when he received news of the raid; blaming the commander of the corp of observation for letting the Monrovians through without noticing them. In order to re-gain some measure of control of the situation and heal his wounded pride he decided to intercept the Monrovian raiding troops.

The King took his Guard du Corps and what troops he had immediately available and ordered a Dragoon Regiment to meet him at Zorfburg where he intended to catch the Monrovians. The King arrived with his troops at Zorfburg and setup camp. The Dragoon Regiment he had ordered to join him had not arrived - a courier arrived to tell the king it was at least a couple of hours march away.

The king formed up what troops he had to block the route down the Zorf valley and waited for the Monrovians ...
Posted by old-tidders at 04:19 1 comment: