The King and Queen of Wittenberg and members of the court are having a little afternoon tiffin.... 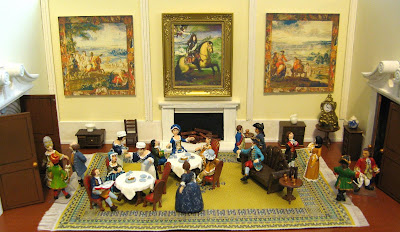 The King's cousin Arch-Duke Ludwig having finished his cup of tea, has taken to reading his favourite book 'The Adventures of Baron Munchausen'... 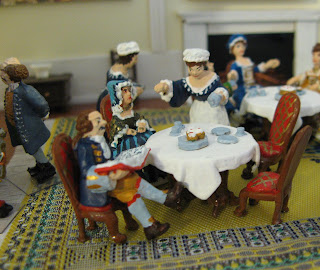 The King seems a bit animated, maybe he's had to much sherry ? 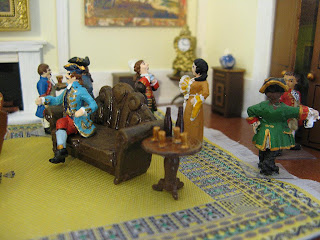 The room is my generic room setup for this little vignette. Where do all the bits come from ? A short list of the main items
a. Sofa - a much modifed childrens toy.
b. Figures mix of Old Glory, Front Rank, Eureka, Blue Moon
c. The chairs, tables, crockey and goblets are from Eureka (part of the 18C 100CIV13-16 sets).
d. Clock, Carpet - dolls house supplier.
e. Sherry bottles made by using some modelling putty on a wire frame.
f. Large plates cut from cardboard.
g. Cakes made from modelling putty.
Posted by tidders2 at 04:25 7 comments:

I've used up the last bits of the castle; the remaining piece of wall was cut in half and built up to form the side pieces of a gatehouse; the main structure of the gatehouse is foamboard, with cardboard used for detailing; roofs are done using paper sheets stuck to cardboard.
All of the wall and tower sections now assembled in the corner of my gaming table with most of my bulidings to fill in for part of a large town or city ...

The forces leaving the town are from the Duchy of Fenwick (a battalion of RSM figs and some Front Rank and Old Glory staff). A couple of close-up views of the gatehouse... 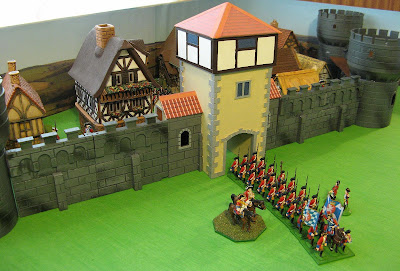 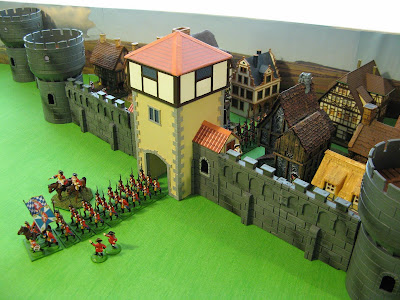 The church/chapel is finished, I went for a printed paper sheet for the roof tiles; I found a suitable image on the internet and made up a sheet of pantiles, I think the effect is just about right. 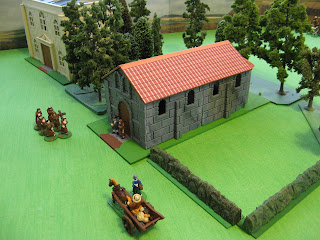 Now onto the last item, a new gatehouse to go with the wall sections that would be more in keeping with the 18C.
Posted by tidders2 at 02:26 1 comment: 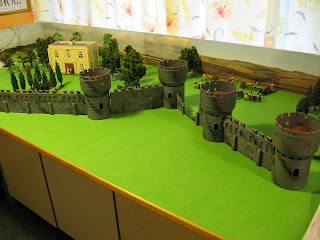 The wooden floors/walkways were set so that 25/28mm figs would be looking through the gaps in the top of the wall ... 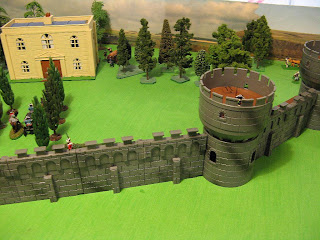 The chapel/church made form the castle parts has now got its roof on, I'm just deciding how to do the roof tiles, printer paper sheet or cardboard tiles cut and pasted on. The last remnants of the castle are now being used to make a suitable gatehouse, more later.
Posted by tidders2 at 12:07 3 comments:

Finished the house made from offcuts of a plastic castle, thought I'd use it in a scenario for one of my story lines.
Count Herman, the King of Wittenberg's most trusted advisor, waits for the arrival of a guest. A delivery is being made of food and supplies to the kitchen.... 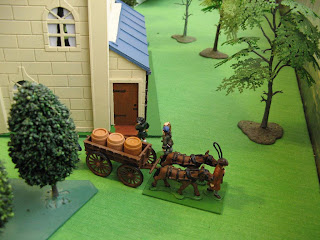 The sound of hoofbeats and carriage wheels is heard and the Count and his wife go out of the front door to greet their guest.  The carriage bears the crest of Madame de Givanchy and is accoumpanied by a rider dressed in grey .... 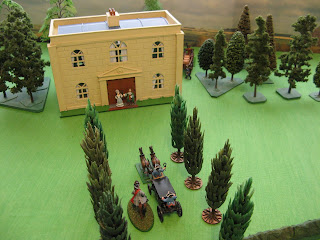 Have completed the first phase of making up the buildings from the castle remnants. Walls have been glued together and stuck on bases. The church has had a west end added made up from offcuts, plus supports for the roof.  The manor house has a new door added which is more in keeping with period. Here they are shown with 25mm figs for size comparison. 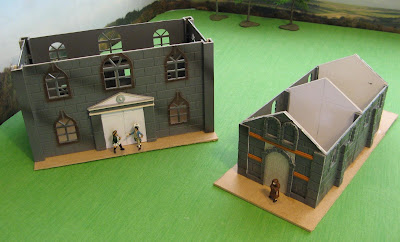 Somewhere in deepest darkest (and of course vile) Stagonia ... ( an incident using 40mm figs)
The Count de Warmes, a Wittenberg nobleman who has been spying for the Stagonians, is just about to get into his coach to return home after a secret meeting with some Stagonian military officers. 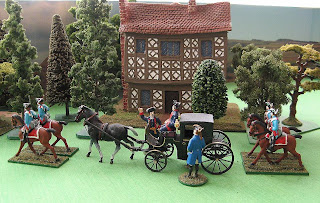 Meanwhile in small copse opposite someone is wating for the right moment....
Rider: Hurry up Von Lessing, they'll be hell to pay if we are caught.
Von Lessing: Shut up you fool, keep quiet and let me concentrate.. 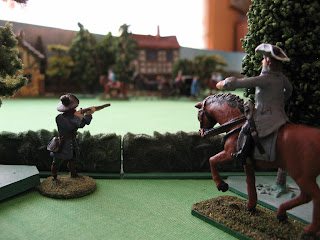 A shot rings out and the Count de Warmes falls down dead.

Rider: great shot Von Lessing
Von Lessing: right lets get out of here
Rider: don't forget you'll have to get into your disguise when we get back to the Inn
Von Lessing: Yes I know, I 'd like to know who thought up my under cover disguise ...
Rider: The Chevalier d'Eon de Beaumont did alright with the same sort of disguise, I think it suits you ..
Von Lessing: very drole, come on the dragoon escort is starting to nose around