Scenario
Count Pottensdorf looked out of the window in dismay at the state of the dragoons, hussars, jagers and grenadiers which had arrived at Ottenheim; he had just received a despatch from General Stricknein:

Out-manouvered at Erlangen, left flank routed - main body of the army intact. Expect remnants of units from the left flank to arrive at Ottenheim; you will take command of them - use them to protect the supply lines and the route to the river crossing at Vanderhof. I have wrong-footed the Wittenberg pursuit and I am at least 3 days march ahead of them. Urgent - send troops to hold village of VortVod to the north of Ottenheim; I expect to arrive there in a few days.

The Count rode out to the camp to inspect the troops and on his return to his quarters he wrote orders:
1) The Jagers - join with rest of Saxe-Jarslberg jagers and proceed to the Village of Wortvod.
2) The grenadiers (who were in no fit state) - return south to defend the river crossing.
3) The hussars - escort the grenadiers and return with supplies.
4) The remnants of the Saxe-Jarslberg dragoons, 60 men from a regiment of 240, to be billeted in Ottenheim.
5) All Saxe-Jarslberg and Hesse-Limburger troops to concentrate at Ottenheim.

After two days march south the Grenadiers and hussars arrived at the river crossing. 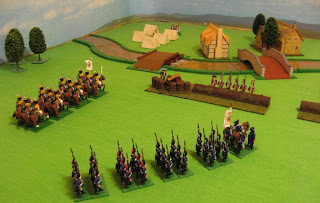 The hussars left the next day with the supply train; along with 2 companies of Saxe-Jarlsberg and Hesse-Limberger grenadiers and a newly arrived Monrovian infantry regiment. 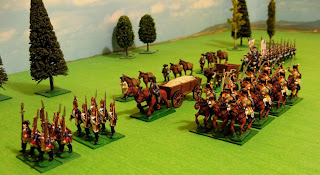 Meanwhile the commander of the Wittenberg Corps of Observation, General Waldebeck, had been monitoring the Monrovian movements using his Uhlans as scouts; he was looking for an opportunity to disrupt their supply lines. He received reports of the supply column leaving their river crossing at Vanderhof and decided to intercept them at Rottenhausen.

'Skirmish Report'
After the Monrovian supply column passed Rottenhausen and was nearing some woodland, the jager scouts shouted 'In the woods !'. The Wittenberg Jagers had appeared on the edge of the woods..

Just after that the Monrovian hussar scouts reported back to report the presence of some militia blocking the way.. Colonel von Grosswartz, commanding the column, ordered the grenadiers to contain the jagers in the woods and ordered the infantry forward to deal with militia; he detailed the hussars to watch the flank for Uhlans ... 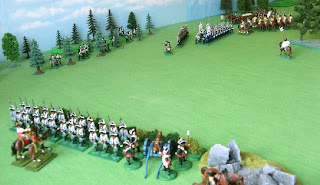 The hussars sight the uhlans, charge them and a desperate melee ensues .. 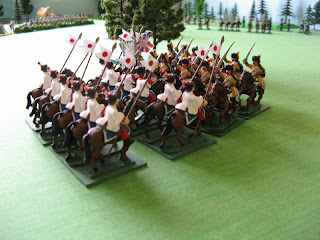 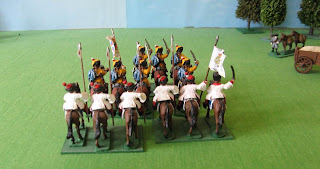 The Hussars loose and are pursued by the Uhlans. Meanwhile the grenadiers have been shot to pieces by the jagers after a prolonged firefight but the Monrovian Infantry charge and the militia rout. 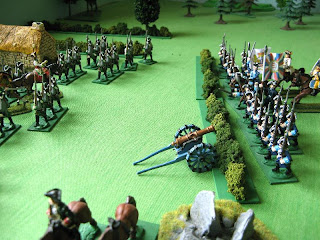 In the failing light, with the militia having rallied and approaching his rear the Monrovian commander discusses terms with the Wittenberg General Waldebeck. 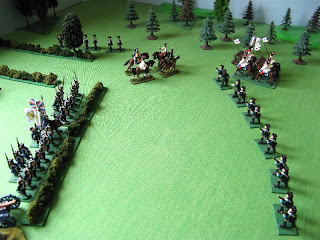 Afterwards
The Monrovian infantry surrendered their muskets and were allowed to leave the field with their colours and march back to Vanderhof.
General Waldebeck, took control of the supply train and moved to the west back towards Verlendt.
Some hussars made it through to Ottenheim where Count Pottensdorf learned of the loss of the supply column and the reinforcements; he sent an immediate despatch to the Monrovian army commander General von Stricknein.
Supply column intercepted by Wittenberg troops at Rottenhausen; infantry re-inforcements and hussars lost or routed. Have sent two companies of Jagers to hold Vortvod; I am unable to send re-inforcements - I will need all my troops to hold Ottenheim to keep the route to Vanderhof open.
Posted by old-tidders at 10:54 6 comments:

The third line regiment of the Boldovian army corps assembles after a lengthy muster.

I bought these in March and it has taken me three months to get round to painting them; I took my time and really enjoyed painting the Crusader figs (officers are Front Rank; mounted officer Old Glory)

I used some spare Prince August castings (a couple have been converted) to try out the uniform scheme for my Wittenland corps units. The main thing was to try the buff cartidge pouch belts on the white uniforms, which seems to have worked reasonably well.

I needed a wagon to for my supply train. I had a some of spare wheels so I scratchbuilt a wagon from cardboard; to complete it I used some Front Rank horses and rider. 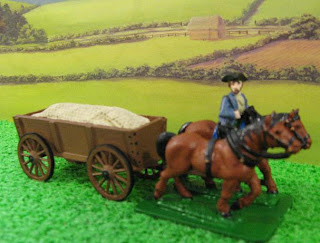 The wagon with the rest of my supply train:

King Leopold IV, escorted by the Chevalier Guard, arrives too inspect the new defences of the city of Heidelheim in Upper Belgravia.

--------oXo--------
All the fortress sections finished at last, except for the breached section. The picture above shows them in the corner configuration. I finished all the guns, 8 in all, plus some sentries for the walls.
Posted by old-tidders at 01:18 6 comments: