I wanted the option of allowing dragoons to dismount and fight on foot, useful for raid scenarioes etc., so here is the first of my dragoon regiments ready for action 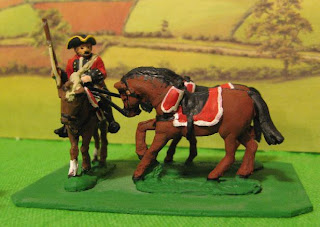 Welcome to the Monastery of Alt-Wittendorf in Wittenberg, home of Brother James .. 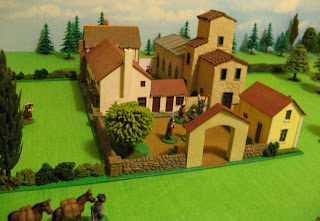 Brother James has just arrived back and is conversation with the Abbot .. 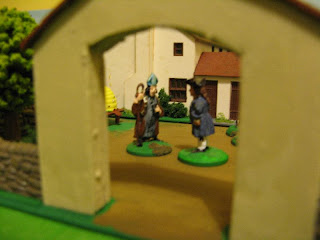 Some monks practice the little known martial arts techniques of Llap Goch, brought to the monastery in medieval times by a visiting welsh monk... 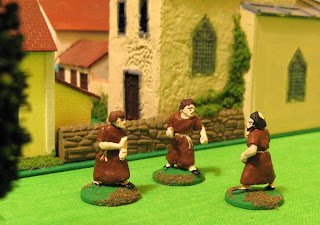 A group of monks near the monastery, they are on a pilgrimage, and have come to visit the shrine of St Tibulus... 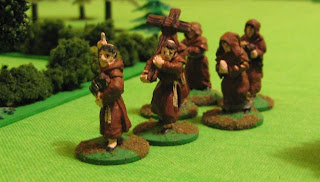 [ The monastery is made up of some spare buildings on an A4 box folder lid, figs are from Gripping Beast and from Irregular Miniatures (some converted).]
Posted by old-tidders at 03:19 6 comments:

The preceding day had been very wet and both sides had had great difficulty moving their artillery trains due to the muddy roads.

The Wittenberg Army started across the river at Wollen aware that Monrovian troops had been seen by scouts in the town of PikaStrudel.

The Wittenberg troops crossed the bridge and deployed slowly, the Field Marshal was being unusually cautious, he had no artillery to use and wanted to get across the river safely and in good order. He had his suspicions this looked too easy.. Where were the Monrovians ? 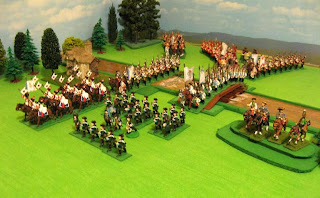 Von Rootsbeer hearing from his scouts that the enemy had crossed the river, ordered them to break camp and march post haste to the positions already allocated to them. 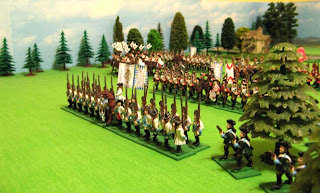 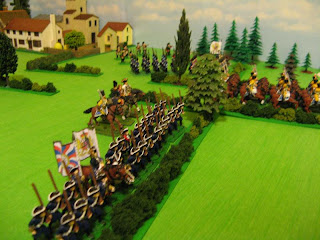 The Wittenberg Uhlans charged the Monrovian Hussars, the Uhlans broke and routed. The Hussars carried on and came up against a battalion of Grenadiers, a sharp volley of musketry decimated the hussars and the remnants broke and ran, 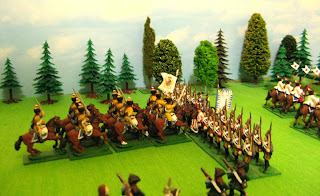 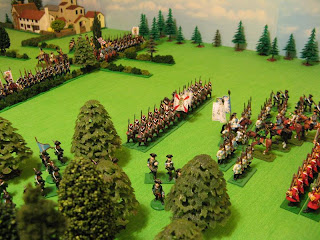 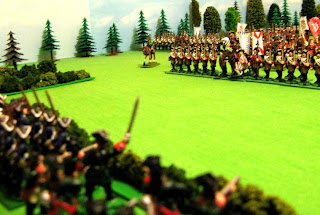 The attacking infantry were taking too many casualties. The Field Marshal ordered the withdrawal, saying to the King - Your Majesty we must retire, we won't get anywhere without artillery.. 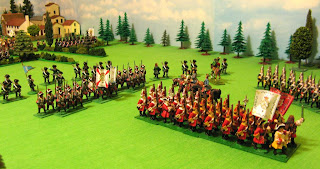 4) Afterwards
The King of Wittenberg was disappointed, he had wanted to capture Pikastrudel. The Field Marshal was not happy, the Wittenberg infantry had been a unstable, musketry was poor - there was more work to done yet before they would be ready for a major battle.
The Monrovian commander was pleased, he had held off a large force and taken few casualties. He wasn't happy though at losing the pontoon bridge equipment. Where were those three dragoon regiments who had persued him ? He hoped they had gone home.
What the Monrovian commander didn't know was that the three Dragoon regiments had crossed the river under cover of darkness and were on their way to raid a important Monrovian military target.
Posted by old-tidders at 07:28 4 comments:

The Wittenberg dragoons shadowing the Monrovian withdrawal from GugenStadt, met up with two regiments of cavalry sent by the King to attempt to block the Monrovians from reaching their river crossing at Wollen.

General von Stricknein had forced marched his troops and crossed the river, they were in such a hurry due to the pursuing Wittenberg cavalry they didn't even dismantle their pontoon bridge. The Wittenberg cavalry reached Wollen and secured the river crossing and waited for further
orders.

The King of Wittenberg determined that such a foray into his sovereign territory should not go
without a response gathered his troops together and moved to cross the river at Wollen. His aim to capture the small town of PikaStrudel. His intention was to use it as a base of operation for further strikes into Monrovia.
Posted by old-tidders at 02:35 2 comments:

The combined Guard bands march past the King and his courtiers... 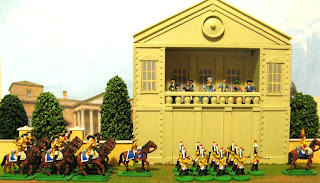 A close-up of the Guard Cavalry Band (finally finished, they've been sitting on my painting table since August !!): 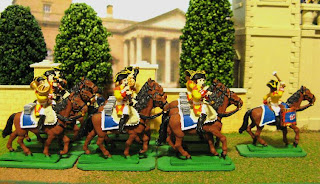 New for the Baggage Train

Some extra mules and some pack horses, (Figs: Irregular Miniatures) .
Posted by old-tidders at 02:19 1 comment:

The Duchy of Fenwick artillery, just arrived at Tippelbruder, get some practice in.
[all figs are from Irregular Miniatures, 25mm Marlburian range].
Posted by old-tidders at 12:28 4 comments: 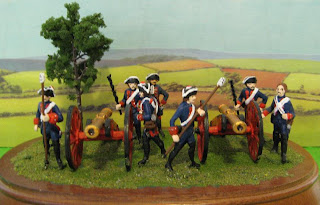 Some Irregular Miniatures 42mm Prussian Artillery and some other converted figures portray some Hesse-Kassel artillery. 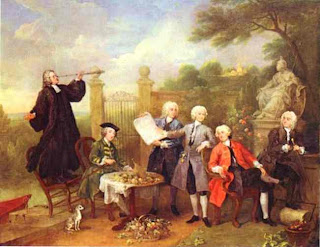