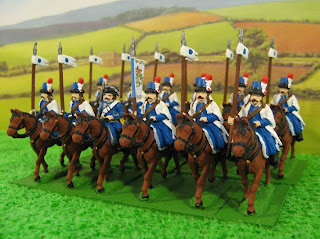 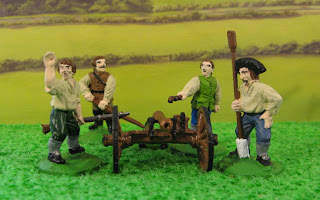 The militia men of the Kings Loyal Belgravian Legion practice with their new battalion gun.
[Figs and gun from Redoubt Minatures FIW range]
Posted by old-tidders at 03:36 No comments:

While the Saxe-Jarslberg troops were at Schnotwitz with Count Pottensdorf, Ottenheim was left under the command of Colonel Hotz commanding the Hesse-Limburger contingent. General Stricknein was to the north commanding the defence of the Vortwod Gap.

Colonel Hotz had limited resources, one understrength battalion and a company of hussars to garrison Ottenheim. There had been trouble at the east gate earlier in the day; 7 men patrolling the wall had been killed and 4 wounded by accurate fire - some Wittenberg Jagers had been spotted in the nearby scrubland - in order to try and flush them out he had sent the Hussars out; intermittent sounds of firing could be heard from the east.

A small supply train escorted by three companies of replacement infantry was overdue, Colonel Hotz looked anxiously out from the south gatehouse for signs of their arrival. 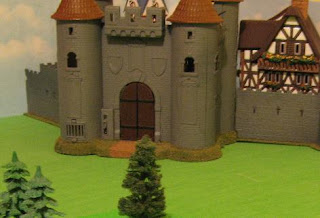 The Colonel picked up his bottle of schnapps and took a stiff drink and hoped they didn't run into any trouble. There had been reports of brigands in the woods.

The column had been marching hard for most of the day. Captain Dumbkof examined his map. He found a quicker route than that on his journey instructions, he could save at least 3 hours by cutting off the corner and going though a semi-wooded area. We're close to Ottenheim he thought, the Wittenberg troops wouldn't be around here, we should be safe. The column marches .... 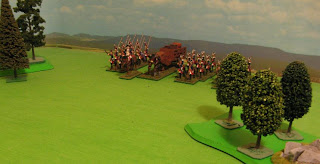 The lookout at Ottenheim southgate reported to Colonel Hotz - the column is coming through the woodland area sir, not along the main road. Look ! 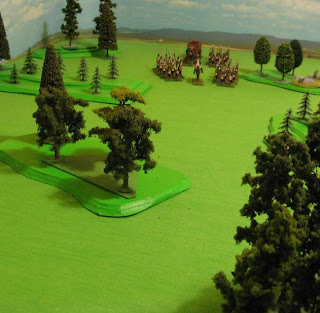 A flock of sheep started cross the line of march, Captain Dumbkof ordered a halt to let them pass. A spatter of musket fire erupted from a nearby coppice and a company of Wittenberg militia charged into the lead company ... 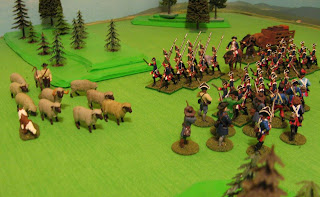 After they had fought off the attack, the remnant of the grenadiers forced their way through the flock of sheep, while the other two companies re-grouped. 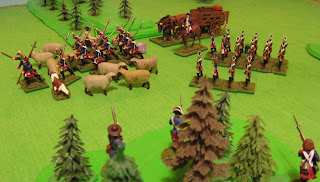 The grenadiers forged ahead, as they passed between two coppices - ambush ! a company of Wittenberg militia from one side and a company of jagers from the other. 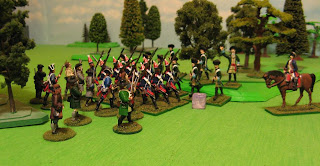 The grenadiers fought bravely, trying to hold on till the rest of the column came up ... 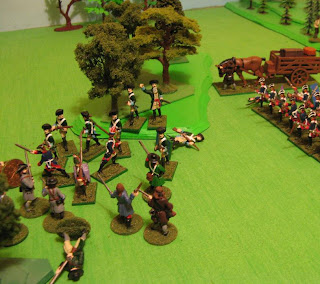 On the approach of the rest of the column the attackers withdrew back into the woods. The remnants of the grenadiers joined the column. Just as they were getting ready to move off the jagers edged out of the woods and let forth a vicious volley ... While a small band of brigands tried to move through the flock of sheep to attack the rear of the column .. 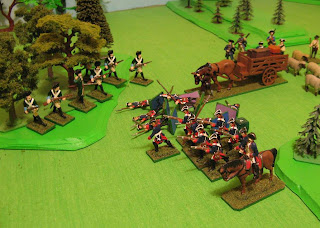 Captain Dumbkof ordered his troops to march on as fast as possible; off they went trying to keep the jagers and brigands at bay ... 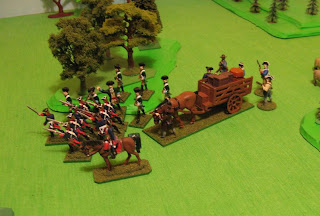 The Captain made a dash with the supply wagons while the rest of the troops try to hold of the pursuers, but it is not his day. Two bands of brigands rush him ..... 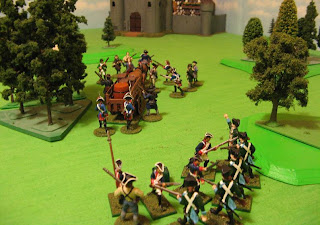 The last few survivors of the column run for the southgate of Otteheim ..

The brigands prepare to divide the spoils .... 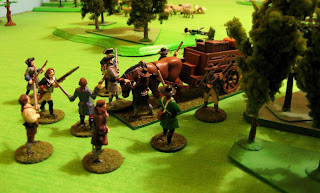 -------------oXo-------------
A great fun game that took two hours to play. The column was wiped out due to a trail of high dice rolls for appearing units and their actions. We fought the game using the Battlegames Zulu Wars rules with some slight modifications to fit my 18C scenario; basically,
Posted by old-tidders at 01:14 3 comments: 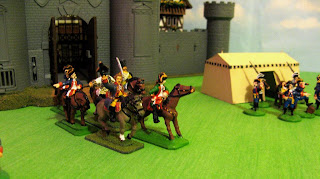 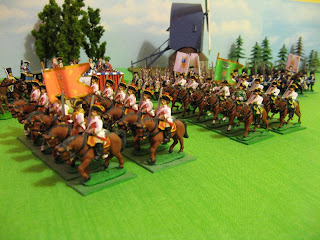 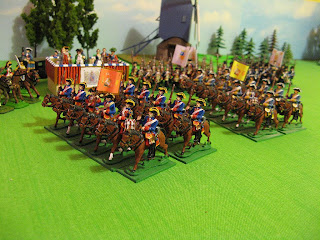 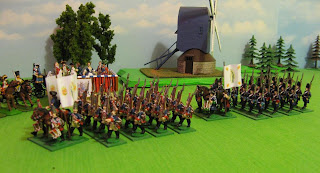 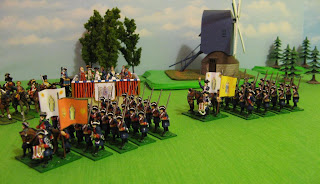 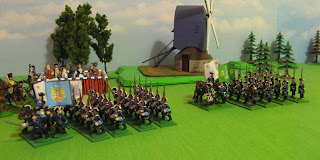 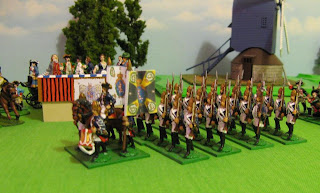 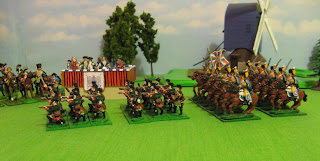 At last finished the last battalion of the Monrovians 'Army of the East' I feel a parade of Monrovia's army is necessary.

The Militia has Mustered

The figs from Front Rank have arrived (sorry if photo is a bit blurry). Looking forward to painting them - sometime soon I hope.
Posted by old-tidders at 08:14 1 comment: