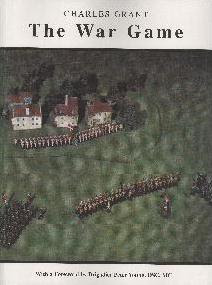 My Xmas present to myself (a sensible indulgence). I thoroughly enjoyed reading it. It's a new edition, with a rules summary included. I would like to use the rules or those from Charge.

I decided on a little project, use 42mm figs cast from molds (or purchased), to fight out little border patrol skirmishes. 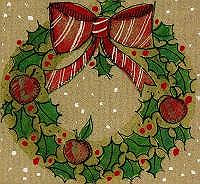 Merry Xmas and a happy new year to all.

I shall be doing some painting over the Xmas period and most of important of all reading my newly acquired book the 'The Wargame' by Charles Grant.

The commander of the dragoons had deployed his troops, guarding the plunder taken on their raid of Haffenstadt and was awaiting the re-inforcements who were intended to garrison the town.

The commander of the guards sent a fast rider to the garrison at Hildaburg, ordering them to rendezvous with him at Faffenstadt.

Two regiments of Wittenberg dragoons has dismounted and were defending the orchard to the north of the town.

The Monrovian guards arrive and start their deployment ...

The Wittenberg Leib-Dragoner regiment moved into postion to protect the town from encirclement and charged the Monrovian guard cavalry ... 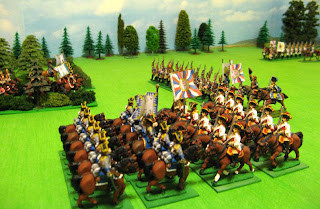 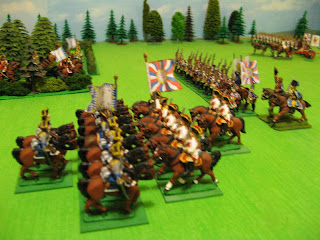 During the melee the infantry and artillery from the Hildaburg garrison arrives. The foot guards proceed to flush the dragoons from the orchard, with some help from the artillery ..

The two dragoon regiments defending the orchard taking heavy volley fire from the foot guards and also suffering casualties from the artillery decided that somewhere else would be a better place to be and took to their heels. The Wittenberg re-inforcements start to arrive .. 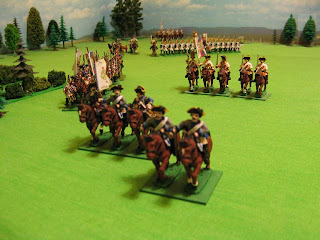 The Wittenberg reinforcements arrived and a battalion was sent forward to attempt to re-take the orchard but found more than they bargained for ... 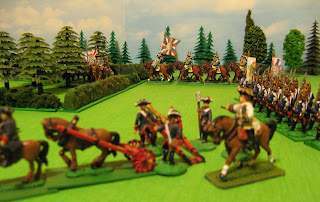 Both sides pull back, at the end of the day neither side has full control of the town, although Monrovia has the edge... 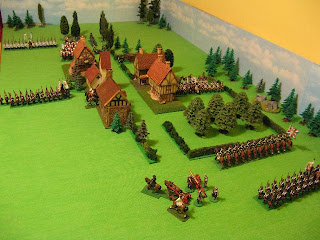 The day after the Wittenberg forces had made their attempt to capture the small town of PikaStrudel, three regiments of dragoons which had crossed the river during the night made for the town of Haffenstadt, where the Monrovians had a magazine. The two companies of Monrovian garrison infantry found themselves outnumbered and surrendered. The Wittenberg dragoons stripped the magazine of supplies and loaded up mules and carts; before they left they set the town alight.

Hearing of the Wittenberg actions at Pikastrudel the Monrovian General von Stricknein moved his army up to the east of the town and called for re-inforcements. As he arrived he heard of the raid on Haffenstadt. He sent orders to the Guard cavalry and infantry who were on the march to Pikastrudel to attempt to intercept the Wittenberg dragoons.

Meanwhile the Wittenberg dragoons had reached the town of Faffenstadt, following their orders, they were instructed to wait there till joined by an occupying force on the march from Wittenberg.

A day later as the dragoons stood to waiting for their re-inforcements, the Monrovian guard troops arrived ...
Posted by old-tidders at 12:22 2 comments:

Another one of my 42mm dioramas, this time a Reicharmee unit from Franconia, IR Everfeldt 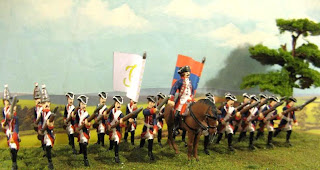 A closeup of the flags and mounted officer 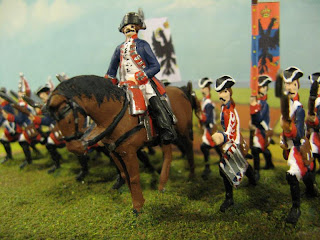 Figs are cast from Prince August moulds, mounted officer is a modified Irregular Miniature one. I've got enough cast figs for another diorama, plus just enough metal left to cast a battalion of grenadiers.
I always enjoy a change of fig size and the casting process is great fun (but sometime a little frustrating).
Posted by old-tidders at 01:44 2 comments: 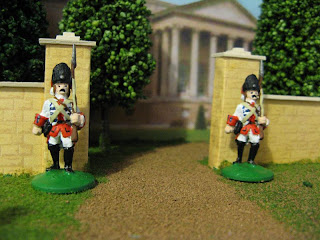 Currently on duty are some grenadiers from the Garde Suisses. A trial paint of some sample Austrian figs from Irregular Miniatures. The uniform is that of Garde Suisses from the Duchy of Saxony in the early 1740's, but I decided on Austrian style grenadier headgear.
Posted by old-tidders at 11:24 4 comments:

Fresh from their spray of varnish ... 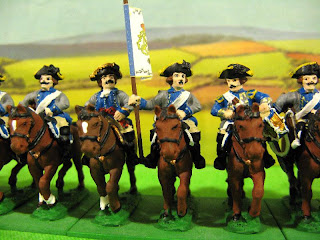 Uniform is based on that of the Saxony Dragoon regiment Graf von Bruhl. [figs : Front Rank]
Posted by old-tidders at 02:24 2 comments: