The King reviews the newly expanded Chevalier Garde, of the Garde du Corps.

Wittenberg - at the palace 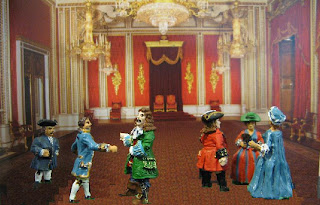 Scene: the throne room. Count Herman of Munster has returned from the Duchy of Fenwick and is in discussion with King Leopold IV.

King: A successful visit to Fenwick then dear Count ?

Count: Yes your majesty. your sister Alice and Duke Maurice are now married - I attended the ceremony before I left. Your sister really loved that Meissen tea service you sent for a present. The happy couple are off for a tour round Fenwick, then they will be visiting us here.

King: I would love to see the look on King Francis of Monrovia's face when he hears the news.

Count: I bet he will have another temper tantrum.

King: So we've stopped Monrovia from getting round our northern flank.

Count: Yes, even if Monrovia tried it they'd have to reduce the border forts and then face the Fenwick army; giving us plenty of time to come to their aid.

King: Did you here the news from Tippelbruder?

Count:Yes, it reached me while I was in Fenwick. Duke Maurice was pleased we'd been involved in defeating the Stagonian punishment force.

King: Ah, Brother James has just arrived .. we need to show him those strange papers which were recovered recently when a Uhlan patrol captured some brigands. Borther James come with us to the library ...

[Note: the throne room backdrop is the one in Buckingham Palace]

For the last month I've been re-organising my 40mm figs. I felt that the Prince August castings I had on diorama bases should be used, so they all got touched up rebased and re-incarnated as Saxe-Jarlsberg & Hesse-Limburger troops:

There is one artillery piece and crew (Irregular Miniatures-IM); 1 Company of Hesse-Limberger infantry and two companies of Saxe-Jarslberg infantry (Prince August) [at 15 figs a company a battalion would be 60 figs]

For Wittenberg I rebased the Garrison troops (IM), and gave them sone artillery(IM). The brigands (Front Rank + some IM) have been combined to make a militia company.

Scenarios for the use of these figs is border skirmishes and small actions in the south of Upper-Belgravia (the disputed province) where it borders Saxe-Jarlsberg. 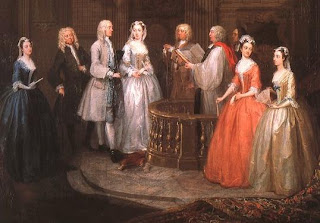 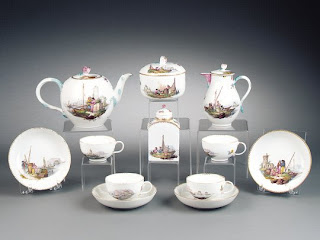 Scenario: Two bands of brigands have been reported operating out of the area of Ottenheim; it is thought that one of the groups of brigands has it's hideout near a woodsman's cottage. There are rumours that some of the brigands may be Monrovians in disguise. The commander of the local garrison has been ordered to take some troops to flush out and eradicate the brigands - recover any stolen goods and if possible to capture some brigands for questioning.

The Wittenberg forces, one company of a garrison regiment and a small detachment of jagers, arrive at the village of Wittelbuf (near Ottenheim) ... 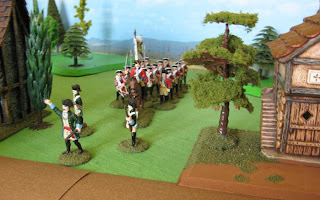 The jagers and the garrison company find and kill a group of brigands... 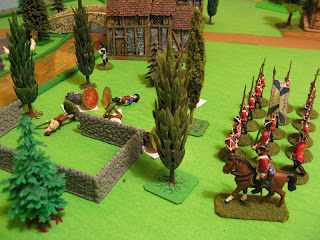 Believing there is only one group of brigands to search out, the officer in command moves on ahead across the river, leaving the jagers to follow on behind. 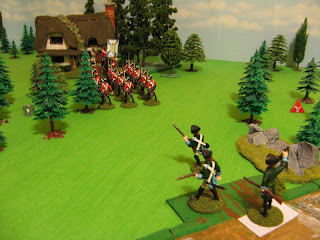 The jagers find some more brigands and get into a fire-fight in the woods .... 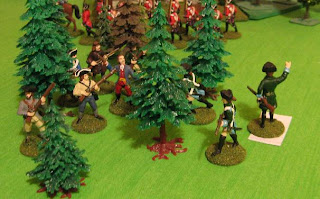 The jagers get shot up badly and the survivors looking for cover in an adjacent coppice get captured (by another group of brigands !) .... 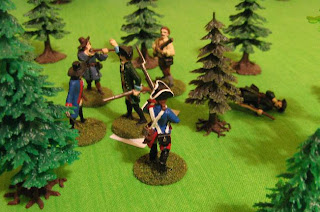 The garrison company charge into the woods trying to catch brigands who very sensibly evade them... 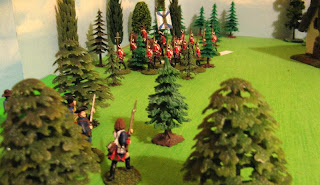 Reforming in the open at the edge of the woods, the garrison company comes under fire from 2 bands of brigands ... 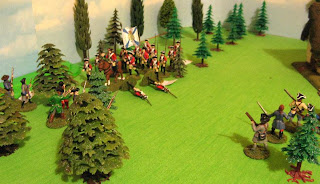 With the light fading and some of his men badly wounded the commander orders a withdrawal; the brigands follow for a while and pick off a few stragglers. After spending a miserable night in the forest the garrison troops get back to the village of Wittelbuf in the morning .... 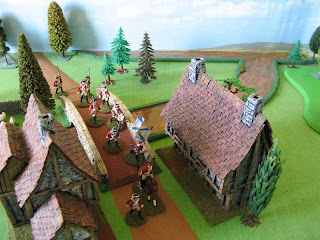 3) Summary of game
We had great fun with this; the rules were loosely based on some FIW skirmish rules I found online. Result possibly as expected - regulars trying to fight in wooded area are likely to have difficulties - the jager detachment should really have been bigger this would have given them more chance in a firefight.