The grenadiers form up in line, and the General starts his inspection..

he is pleased with what he has seen and instructs Count Boritzy that they are to be prepared for departure to the south. The General also enquires when the rest of the freikorps will be available, he is especially interested in the Uhlans and asks the Count to double his efforts to have them ready as soon as possible.
[figs: Cast from Creartec moulds; except the drummer (Irregular miniatures) and officer with partizan (Sash &Sabre)]
Posted by old-tidders at 03:40 2 comments:

Wittenberg - The Duke of Fenwick departs

The Duke of Fenwick has completed his visit to Wittenberg. The King and the court are saying their goodbyes, before he departs. 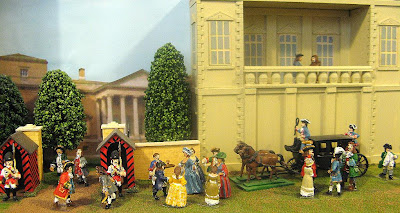 [all my personality figures now have their clear bases done, it makes such a difference to the look - no clonky big thick bases] 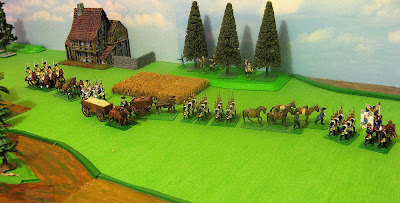 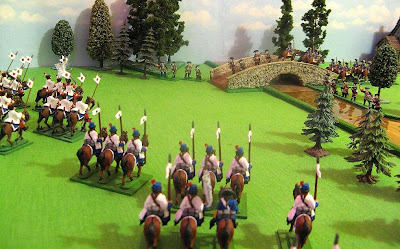 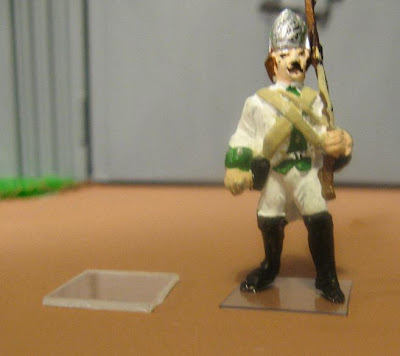 It may be some time before the palace or some of its rooms appear.
Posted by old-tidders at 11:54 3 comments: 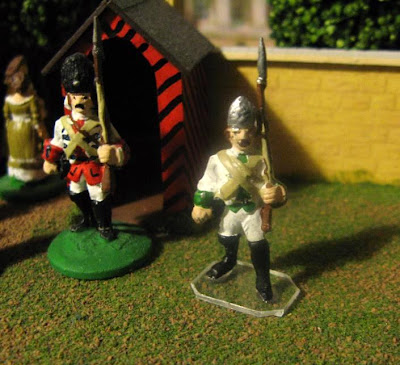 I tried to sketch out a plan for the palace building, I found this could be potentially very large and make for storage problems. Another problem I thought of was if the rooms had ceilings then taking photos might be tricky. So initial concept is:

1. Exterior - A low relief model of the front of the palace, main entrance with portico and some part of the gardens.
2. Interior - build separate rooms, corridors (with optional ceilings), easier to work on and also makes it easy to add another room if I think of one. Also these can be stored more easily.

I'll be trying out putting a clear plastic base on a spare figure next.
Posted by old-tidders at 05:52 4 comments:

I really enjoyed the visit to the map room on Campaigns In Germania (http://campaignsingermania.blogspot.com/2009/03/planning-next-campaign-in-germania.html) so much so that I thought wouldn't it be nice to have a model scene where my personality figures could be placed in for better pictures.

Initial concept is Wittenberg palace and parts of the gardens. The idea is to have a model palace with removable front and a suitable selection of rooms. A challenging project, but I'm eager to have a go.

Build a model palace - the madness of King Leopold IV !

Before I can think of sketching out some plans, I want to figure out a better way of basing the personality figures than green bases - current idea is to put them on clear plastic bases so they can be placed on different floor/ground effects. This will be tricky as I will have to cut the figure off its base carefully just below the bottom of its shoes.
Posted by old-tidders at 05:59 9 comments:

A meeting had been arranged. late in the afternoon, on the edge of the forest near Wittenberg to handover the documents to a representative of the Sect of the Phoenix, named Henrik Van der Gries (also known in Wittenberg as the 'fatman', a wealthy dutch businessman involved in trade on the river Oudear). 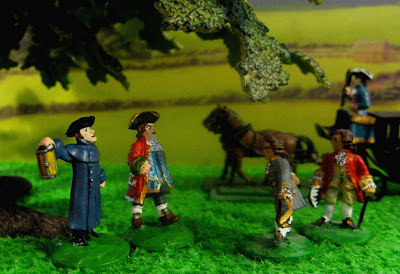 Van der Gries: Good day gentleman ? I believe you have something for me ?

Toronov: Yes we have. (he hands over the documents and personal effects of Count Revolvendors).

Van der Gries: Here are some gifts for the King and Count Munster, please deliver them and thank them for the delicate handling of the affair.

Toronov: Thankyou, we will deliver them.

---oXo---
Later that day, in the library the King and Count Herman discuss their gifts ... 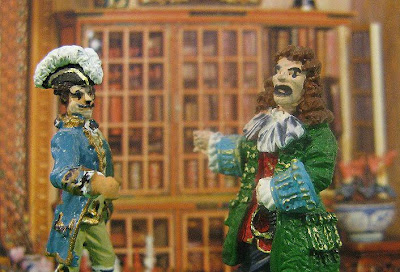 King Leopold: What you receive Count ?

Count Hermann: A portfolio of risque drawings by Fuseli and Fragonard.

King: How marvellous, they will make a nice addition to you collection.

Count: What did you get ?

King: A small enamelled french clock for my wife, and for me a magnficent black onyx carving of a falcon.
Posted by old-tidders at 03:37 4 comments:

A few figs which can be used either as a company of militia skirmishing or to represent a band of brigands or even smugglers.

The Boritzy Freikorps is to be deployed in the southern border regions to contain and confound cross border incursions by Saxe-Jarlsberg.

Below is Count Konrad Boritzy, whose freikorps is currently being raised (40mm Irregular Miniatures Hussar on a Creartec horse). 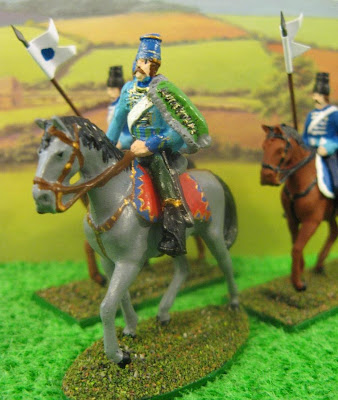 The uniforms of the Boritzy Freikorps: 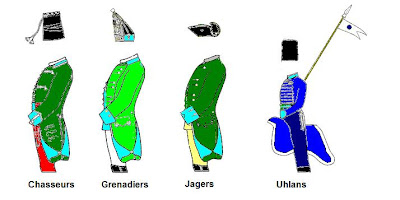 There will be a battalion (~30figs) of each of the Chasseurs, Grenadiers and Jagers; the Uhlans will be a regiment of 2 squadrons (~20 figs). All units to be comprised of 40mm figures.
Posted by old-tidders at 10:06 4 comments:

The first battalion of the Duchy of Fenwick's Wittenberg Legion is now fully equipped and has been turned out for inspection. First they do some marching in column ... 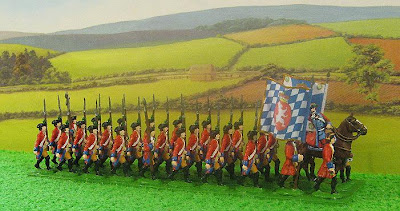 Then form into line; two senior officers from the staff inspect the line up ...

The two staff officers pass the 1st Battalion as ready for service, their next job is to check the newly arrived uniforms for the 2nd Battalion are fit for purpose before being issued to the men.
[figs: Infantry Battalion RSMs, staff officers Old Glory]
Posted by old-tidders at 06:08 9 comments: 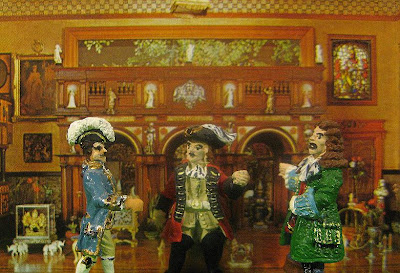 Duke: What are we going to do about this affront to your ambassador, and to my military attache, when they travelled through Stagonia ?
King: A most unfortunate incident, being robbed of their posessions and also their coach being taken. They should have waited for the flood waters to recede and proceeded on the safe route.
Count: It would have been a long wait your majesty, I think Count Hatzof took the right course of action.
King: Have we ensured that they have received extra money and funds from the royal bank to cover what they have lost ?
Count: Yes we have received confirmation the extra money has been received by them.
Duke: What are we going to do ?
King: Nothing, it's not worth letting this small incident start a war. Stagonia is a vile place and it's ruler is equally vile - its the sort of vile thing you would expect to happen. Hatzof new the risks anyway. Count Hermann were the false documents being carried by Hatzof confiscated ?
Count: Yes they took everything, Hatzof made such a fuss about his papers they took extra interest in them.
Duke: What false documents ?
Count: Just in case he had to go through Stagonia, we created some documents which in the event of them being confiscated would provide false information to the readers. It looks like that has happened, the contents may give us an edge or confound them.
Duke: what was in them ?
Count: In amongst the normal sort of papers an ambassador would carry we put some about army units positions and strengths; some of which were correct, some false and some wholly ficticious. Also included were documents about ficticious plots to overthrow King Ludwig of Stagonia, citing potential contacts in the army and the nobility - no actual names just initials. We hope the plot papers will distract King Ludwig he'd notoriously paranoid.
Duke: You are most cunning Count Hermann.
King: Yes indeed he is ..
Count: Your Majesty, how do we respond to the cross border raid on Oberstein ?
Duke: Teach them a lesson, invade Saxe-Jarslberg and burn their capital.
King: I think the Duke's idea is most delicious. However any attack on them would result in Monrovia declaring war, we are not ready yet. For now we'll take countermeasures; Count instruct the Field Marshal to send a converged garrison grenadier battalion and Freikorps Boritzy to the south to re-inforce General Waldebeck. Also compensate the people of OberStein for their troubles, use supplies from our magazines and give them money to replace any lost livestock.
Count: The extra troops and the river marines which will be based at Vanderhof should deter Saxe-Jarlsberg. I'll get onto that right way your majesty.
King: Maurice, thats enough of affairs of state for today lets go and find our dear wives and go for a ride.
Posted by old-tidders at 12:34 4 comments: