A change from my usual unit painting, I wanted a set of figures doing picket or scouting duty. So using a selection of Front Rank figs, plus a spare grazing horse and the mounted officer from Foundry, I've got my self 3 mounted and 3 dismounted figures; some needing a little bit of conversion. Anyway first idea on setting out shown below.

The King is paying a visit to the cellar, where all his supplies of beer and brandy are stored. The palace complex includes a brewery. The beer, known as 'Königlieblingbrau' is brought to the large cellar for lagering then put into smaller barrels to move it to the kitchens or offsite to other royal residences.

I hadn't planned to do the cellar, but I got the idea when I saw the large plastic barrels at a local 'car boot' sale. A nice simple room to construct, the walls and floor are printed paper stone and flagstone sheets, the doorframe is a made from cardboard with the door from a scanned in image of part of a old model railway building; the large table is a piece of dolls house furniture with the legs cut down.
Posted by tidders2 at 02:43 7 comments:

Away to the west on the other side of Monrovia the advance guard of their Army of the West has crossed into the Duchy of Zomverre. Some units who had arrived the night before had camped further up the valley and are now forming up for their next move ...

The commander of the advance guard tries to sort out the confusion at the river crossing ... 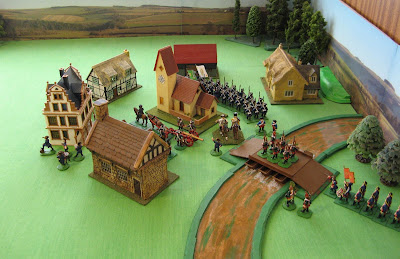 Meanwhile up the valley an officer tries to get an infantry regiment to move into the nearest village, the commander is reluctant as he is concerned that they are becoming detached from the rest of the advance guard .. 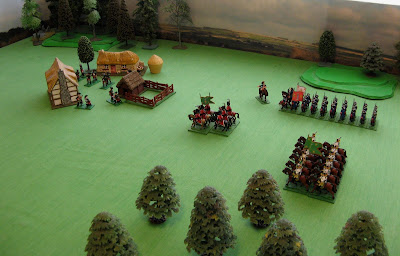 Scouts from the Duchy of Zomverre are delighted that the Monrovians deployment is in a mess, a courier departs to take the news to their commander who is nearby with the army .. 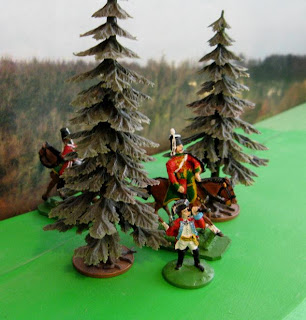 Can anyone figure out the scenario inspiration ? which battle from a famous book (no more clues..)
Posted by tidders2 at 07:13 6 comments: 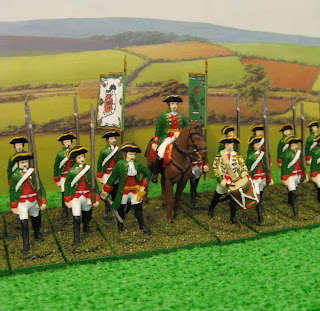 [Figs: All cast from 40mm Creartec molds, apart from officer and drummer which are Irregular Miniatures with Creartec heads.  All the musketeers are grenadier castings with their heads removed and replaced with ones cast from them artillery crew mold.]
Whats next, well I'll be back to painting some 25/28mm figs, a new palace room is under construction, plus a upcoming game - plenty to keep me busy.
Posted by tidders2 at 10:00 3 comments:

To finish off the next phase of my Monrovian army expansion I needed 2 infantry battalions and 2 cavalry regiments. I liked the look of the Irregular Miniatures austrian infanrty and prussian hussars; they also provide a painting service so for a change I decided to give that a try. So off went the order last month, they arrived a couple of days ago.

As I'm on my Easter week holiday, I've got plenty of time for painting and modelling. Yesterday in between some little DIY jobs I based up the two new units for the Monrovian army.
General Stricknein rides out to inspect the new addtions to his 'Army of the East'... 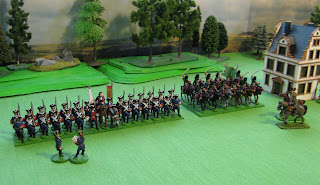 A closeup of the infantry (I've added the flags and a mounted officer from Foundry).. 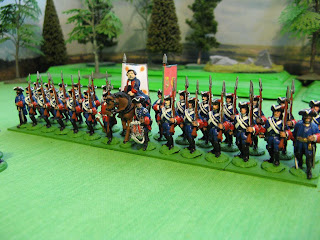 I'm particularly pleased with the hussars, I carefully modified one of them to carry a guidon .. 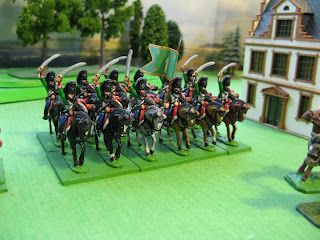 Also in the lead mountain for the Monrovian army is a regiment of Crusader cuirassiers and a battalion of RSM infantry - these will be painted up in due to course.

What about Wittenberg, they must surely need to keep up with the 'army' race; don't worry also waiting to be painted are some Front Rank cuirassiers and an infantry regiment. In addition to those I plan to add another 4 battalions of infantry - this will eventually complete the Wittenland army corps.
Posted by tidders2 at 02:51 5 comments:

Having spent the last two days setting up my new Windows 7 PC and transferring my files over it was nice to get back to doing some modelling. I finshed some 40mm jager conversions
I had ordered some Sash & Sabre AWI hessian jagers, plus a couple of suitable Front Rank figs from their AWI range. All figs needed their gaiters delineating. Then with few arm swaps and tweaks I've now got some more varied figs to add to Wittenbergs King's Jagers unit.

Principality of Munsterkasse - Regiment of Dragoons

A regiment of dragoons lines up for inspection by the commander of the Munsterkasse troops. The whole contingent will soon be marching off to join with the Monrovian army of the east.