New church for my scenics 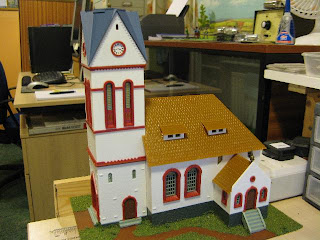 A new church for my scenics. A cheap Vero kit I bought at a toy and train fair. Being lazy I didn't use all the bits in the box; I also cut off the spire, mainly because it was too tall and would be easily knocked over when on the wargame table. 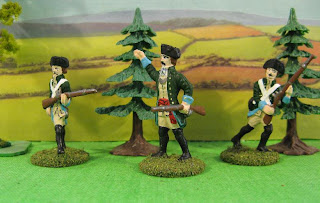 A small detachment of Wittenberg jagers searching the woods for the brigands.

Some more figs for my 40mm skirmish games. I used some Nurnberger Meisterzinn moulds to cast these.

I have found the usual problem - each manufacture defines 40mm as something slightly different, however there is not too much discrepancy between Irregular Miniatures(42mm), Front Rank AWI Range (40mm) and the figures I cast.
Posted by old-tidders at 02:55 3 comments:

The Monrovians had crossed the river Oudear in the south near the juncture of the border with the Imperium and Saxe-Jarlsberg (an ally of Monrovia). The commander of the force, General von Stricknein ordered was to capture the town of Zondheim. The army marched eastwards ... Some Uhlan scouts kept the Wittenberg general staff up to date on the progress of the Monrovians' march. The Wittenbergers gathered their nearby troops and marched to intercept them at Erlangen.

It was sleepy early morning at Erlangen, no one was stirring not even a mouse ... 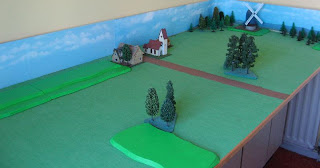 The King and the Field Marshal arrived at Erlangen and used a rise in the ground next to
the village to watch the approaching Monrovian army.

The advance guard arrived in sight of Erlangen and reported the presence of Wittenberg troops to General von Stricknein. 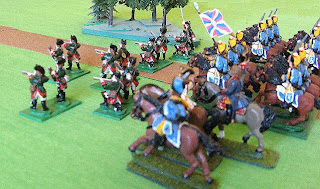 Both armies deployed, each had different battle plans, both chose to deny their left flanks.

The Monrovians planned to take the village and the use open ground to get past the village, deploying their infantry in line, with cavalry and artillery protecting the left flank. They started their advance. 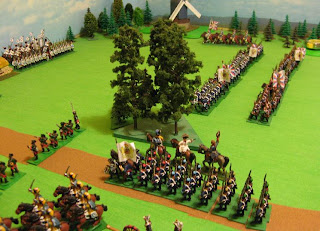 The Wittenberg plan was to hold the line of the rise on the ground next to the village, with Jagers in the village and a battalion of Fusiliers plus the Uhlans holding the gap between the village and the forest. When the deployment of Monrovians was in progress the King decided to attack the Monrovian left flank against the advice of the Field Marshal. The troops formed up and advanced over the rise. 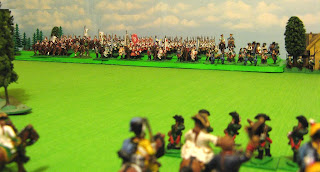 The Wittenberg troops advanced, to the sound of the guard band, towards the Monrovian left flank. The Monrovians started to re-deploy their cavalry to meet the threat. 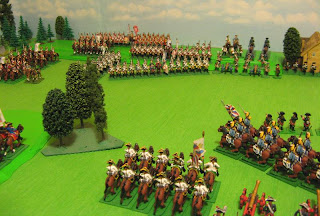 Meanwhile the Monrovian infantry continued their advance, the Jagers were already fighting in the village and the Grenadiers were coming up in support. 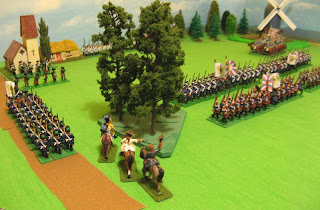 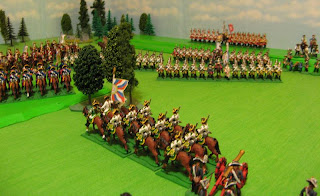 The Monrovian Dragoons failed to counter charge and were routed after the first round of melee, falling back through the Monrovian Heavy Horse who joined the rout. The commander of the Heavy Horse managed to rally them and hold the pursuing Wittenberg dragoons. More Wittenberg artillery fire this time on the advancing Monrovian Grenadiers cause them to flinch then rout, along with a company of jagers. 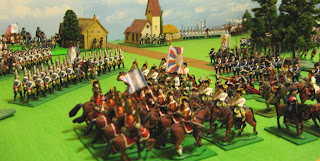 The Monrovian infantry continued their advance but their left flank was now unprotected .. 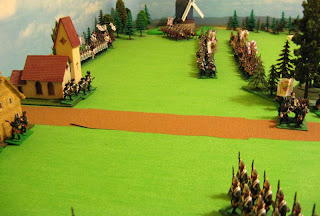 With the Monrovian left flank melting away and with Wittenberg infantry and cavalry threatening to envelope his position, General Stricknein ordered a withdrawal. 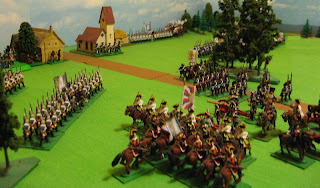 3) Afterwards
The Monrovians withdrew using their remaining cavalry and their guard grenadiers as a rearguard. The Monrovians had been prevented from reaching their target.
The Wittenberg commanders decided to shadow the withdrawal, as the main body of the Monrovian army was still in good order.
Posted by old-tidders at 01:39 6 comments:

IR 12 on parade. Two members of the general staff are doing their final inspection before the regiment marches to join the rest of troops at the muster camp near Hausenberg.

Having failed to secure a foothold in Lower Belgravia at PikaStrudel and Faffenstadt the Wittenberg forces retired to their forward positions in Upper Belgravia.

The Monrovians emboldened by their recent successes in holding off the Wittenberg forces decided to try to obtain a foothold in Upper Belgravia. On some examination of possible places for border crossings it was decided to try in the south near the juncture of the border with the Imperium and Saxe-Jarlsberg (an ally of Monrovia). The commander of the force, General von Stricknein was instructed 'Do not cross into the territory of the Imperium, at all times keep at least 10miles from their border'. After two weeks the troops were assembled. The river Oudear was crossed by pontoon bridges. The Saxe-Jarslberg troops were ordered to hold the river crossing. General Stricknein led his troops towards Zondheim.

Although the main body of the Wittenberg army was inactive, the corps of observation had doubled their patrols and had detected the river crossing. While scouts kept an eye on the movements of the Monrovian army despatches were sent to headquarters.

The Wittenberg general staff decided the Monrovians were heading for Zondheim; Field Marshall Duke Frederick of Wittenbuffel said "We'll intercept them at Erlangen".
Posted by old-tidders at 05:04 No comments:

The King (in light blue coat) and some of the court have come to see the new howitzer. 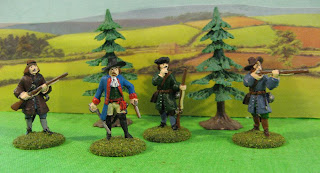 My first group of brigands for my 40mm skirmish games, they could also be used for militia. I've bought some 40mm moulds and will be casting some more figures to be detached companies of regiments on patrol or escort duty.
[figs - Irregular Miniatures marburians/SYw, with some Sash and Sabre heads.]

Wittenberg - Trying out their mortars 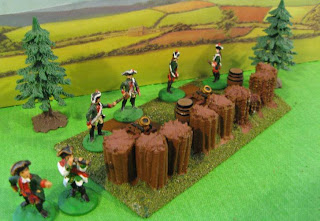 I made up some new fieldworks to allow for use of two mortars or two guns. Here it is shown with mortars manned by some Wittenberg artillery crew. 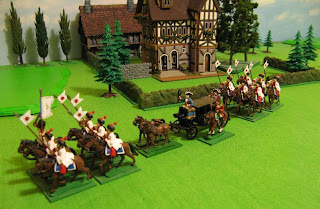