Wittenberg Corp of Observation in Place ..

To: His August Majesty Leopold IV

I am pleased to inform you that all elements of the Corp of Observation have reached Heidelheim in Upper Belgravia.

In an initial sweep of the border area by the Uhlans five highwaymen were apprehended, and a band of about 50 brigands dispersed with many of them killed, those captured have been handed over to the civil authoritites for the execution of justice.

The Corp of Observation will shortly go out on manouvres; subsequently they will take up positions for the full time monitoring of the border with Monrovia.

I have just received news that one of the brigands killed had on his person documents which originated in Monrovia; in addition letters from Stagonia were also found. We will investigate these items and I hope that they were only stolen items taken by the brigands from travellers.

Wittenberg - Uhlans on the March 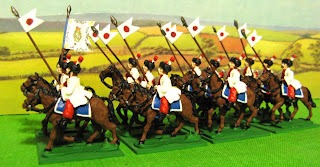 The Red Uhlan Pulk marches to join the corp of observation. Well thats the last unit for the observation corp - now I can get started on the Boldovian army corp.
figs: these are Front Rank prussian bosniaks on Hinchcliffe horses and Mirliton Miniatues horses. I used the lance down bosniak figs and bent the arms to get the ~45degsrees angle of the lance. Advice - buy the lancetop/pennons that Front Rank make - I didn't, it will save you a lot of work
Posted by old-tidders at 01:44 1 comment:

1) Early in the morning

The Duke of Escherstadt rowsed his troops early in the morning and placed them ready for action in the town defences recently completed by the corp of engineers. There was much mumbling in the ranks, not again, we got up early yesterday ...they complained. 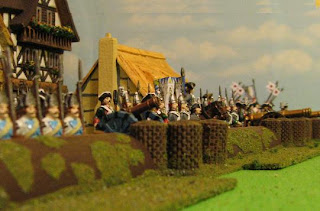 The Monrovians had broken camp at dawn and mmarched into sight of Gugenstadt, emerging out of the morning mist they saw their target. Their commander was bemused, its looks as if there are more troops there than I was told. Just then he heard the sound of artillery and one of the leading infantry columns took some minor casualties. This could be a tricky one thought the General and ordered his troops to deploy for the attack.

The Monrovians deploy, using their cavalry to screen the movement of the artillery. 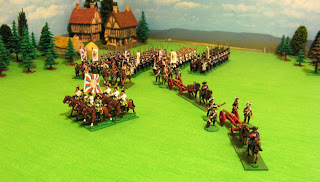 The Wittenberg cavalry and jagers manouvre into position 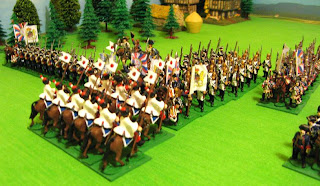 After a short melee the disorganised Uhlans retire. The Monrovians start to disengage. 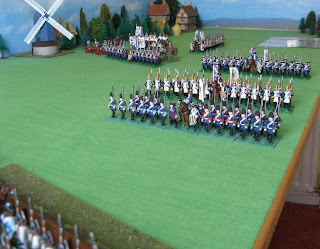 The above looks great, textbook denied flank and attack with grenadiers leading. When they got to the defences it all went horribly wrong -- artillery fire and sharp volleys from the defending infantry forces forced the two lead battlations to rout on morale checks due to high casualties. This is about what you might expect of an attack on defences, you really need heavy artillery for the attackers and some cover for approaching troops.
Posted by old-tidders at 10:48 6 comments:

[this is a preamble to a scenario for the next rules test, this time we hope to see how
attacking a defended town goes; more to follow ..]

After the Monrovian forces which raided the magazine at Schwenk were intercepted at the Battle of Zorfburg, the Monrovian generals held a council of war.

With Wittenberg unable to take the field with its whole army until the supplies lost at the
magazine had been replaced, the Monrovians decided to strike again to interrupt the trade and
supply routes between Wittenberg and the Duchy of Fenwick.

Spies in Upper Belgravia had informed them that the town of GugenStadt, at the confluence of the rivers Oudear and Niebemindt, which controlled the river crossing on the border to Fenwick was lightly defended. The Monrovians decided to attack in force and take the town.

Unbeknown to Monrovians the King of Wittenberg concerned about his supply lines had re-inforced the garrisson at GugenStadt, sending some engineers as well to help build some sort of defences.
Posted by old-tidders at 04:04 1 comment:

Wittenberg Grenadiers on the march ...

The converged grenadiers of the Boldovian army corp march to join the Corp of Observation at Heidelheim in Upper Belgravia (figs are Irregular Miniatures prussians with a Hinchcliffe mounted officer).