Monrovia - King Francis finds out about the hat

Scene: King Francis of Monrovia (green coat with read cuffs) and the Queen relax with some of the court by a small rustic cottage in the gardens of the palace. The chancellor is giving a quick update to the king ...

Chancellor: We have confirmed that the Duke of Fenwick has married the sister of the King of Wittenberg.

Queen: Was it a nice wedding ?

Chancellor: Apparently so your majesty. Strange news from Wittenberg, King Leopold has taken to wearing a rather large hat - he apparently even wears it in bed. Also he seems obsessed with hats.

King: Ha ! I knew he'd go dotty eventually. Hats - useless. Personally I prefer a nice suit of armour. Has the medieval joust been arranged yet ?

Chancellor: No, not yet but preparations are under way. That's all for today your majesty I'll leave you to enjoy the pleasures of your gardens.

King: I'm looking forward to trying on that old suit of armour in the library.

Queen: Your not wearing it in our private apartments, I'm not having you clanking round the palace.

Wittenberg - The King Gets a New Hat

Scene: In the gardens at the palace, Count Hermann of Munster tries to get King Leopold interested in affairs of state. The King is rather unusually fostering an obsession with hats. 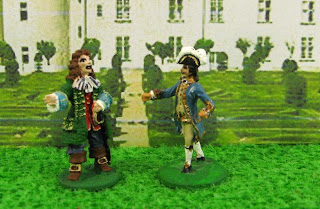 Count: Your Majesty, you're looking rather dapper today in your new hat.

King: thankyou Count, it is the most comfortable hat I've had for years. I particularly like the white ruffle round the tricorne top.

Count: I'm sorry to say this Sire, but your wife is finding your delight in your new hat a bit too much. She says you are wearing it all the time - even in bed at night. Are you sure you are alright ?

Count: Also you seem to be reading rather a lot about hats - 'Topknot Times', 'Tricorne News' and the last thing I saw in the library was 'Hat Weekly' with the main article '"Fancy Bicornes - A new Fad ?". Really your majesty, you should be spending more times on affairs of state especially with the current state of tension with Monrovia .

King: I love wearing my hat. Actually I'm thinking of getting one of those new bicornes - there's a new hat maker in Wittenberg, I might send for him.

Count: Have you seen the Field Marshal yet, he wants to talk to you about the stratgeic deployment of the army to meet the potential threat from Monrovia to the west and also Stagonia to the north-east.

King: Ah yes, I forgot about that; perhaps we should pop along and see him. I'm sure he'll like my new hat.

Tent for the General Staff

The Wittenberg general staff enjoying the use of their new campaign tent.

The tent is made using thick paper with foam board ends to give it shape. I've made a second one for the Monrovians as well, which has dark blue stripes round the top of the tent.

In the south of Upper Belgravia, two regiments of Wittenberg troops are settling in to their new quarters having been moved up to forward positions from the Boldavian province. 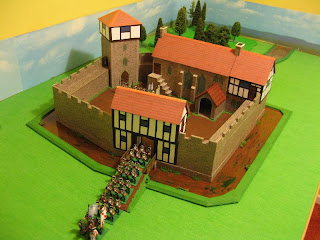 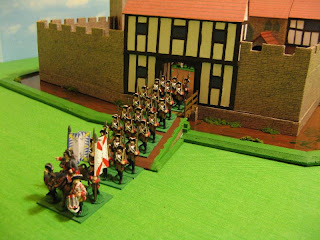 while the other regiment is being inspected by visiting officers ... 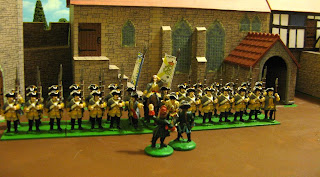 The castle is one I made for my 40mm ECW wargames (Pokesay Castle - fortified manor house), the 28mm figs don't look too small with it so it's been re-used but with an extra addition to the top of the castle keep. The whole things is made from cardboard, foam board and printed papers on an MDF base. All the buildings and wall sections are removable.
Posted by old-tidders at 14:01 6 comments: