A repainted diecast toy (shown in last picture of this post) which came with a princess as a passenger and a coachman. I did these up as passengers and added a new coachman converted from a Nürnberger Meisterzinn casting. I reduced the number of the horses from four to two. 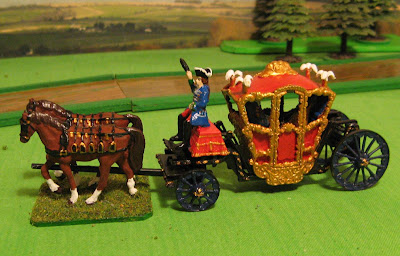 A look at the interior, with the orginal coachman repainted as a passenger, plus the princess in painted up.. 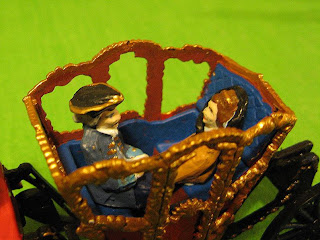 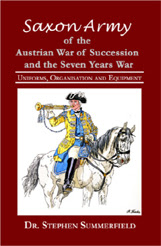 I indulged myself and bought this lovely book, mainly because my Wittenberg army is based on that of Saxony. Its a super book with lots of colour illustrations. After a quick peruse last night I thought I might tweak some of my existing units so their uniforms match up with what's given in the book.
Posted by tidders2 at 04:54 3 comments:

After their defeat at the battle of Pomeroy the Monrovians retreated towards Hohenloe. Field Marshal Stricknein by some deft manouvering had evaded his pursuers. However the Ducal forces soon picked up his trail.


The Monrovians had moved through a heavily wooded area and planned to cross the river Bruer at Dornitz. The Ducal forces split up one part following the same route hoping to catch them up and the other moving as fast as they could to try and head them off at Dornitz.


---oXo---
The Monrovians arrive at Dornitz and start to cross over the River.  Field Marshal Stricknein and his staff keep an eye on the column. They have deployed the guards and two regiments of hussars to block the flank approach to the bridge. 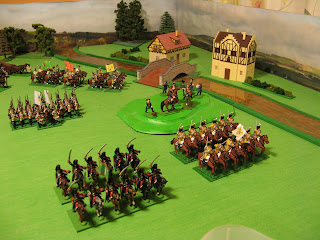 In the distance the Ducal forces hurry towards Dornitz ...

As more units get ready to cross the bridge the threat from the Ducal forces occupies Field Marshal Stricknein and his staff's attention.... 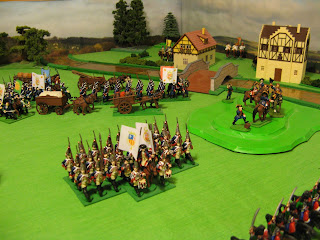 the Ducal cavalry gets closer .. 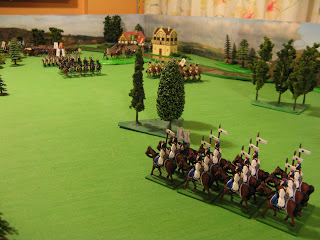 Field Marshal Stricknein sends a courier to the rearguard to change their route (to cross the river five miles east at the ford near Kornitz) in order to draw of their pursuers to prevent the risk of being bottled up. The Monrovian hussars start to move forward to make more space to allow infantry to deploy 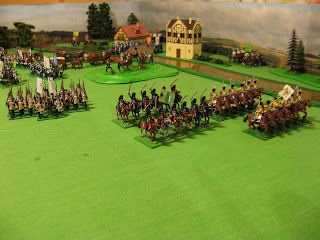 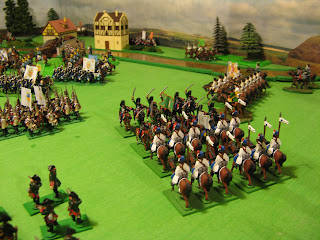 The Ducal dragoons charges into the nearest regiment of infantry while Field Marshal Stricknein tries to rally his hussars... 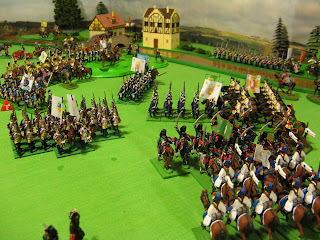 The Monrovian hussars scatter their lancer opponents but set of in a mad pursuit leaving no help for their infantry who are set about by the Ducal dragoons. More Ducal cavalry is approaching .... 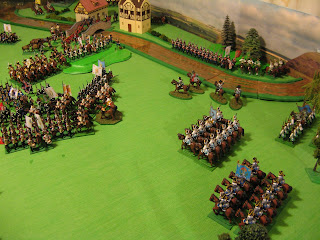 The Monrovian infantry routs and find their way blocked by heavy woods - the Ducal dragoons are in hot pursuit. The Monrovian hussars redeem themselves my counter-charging a regiment of Ducal cuirassiers. 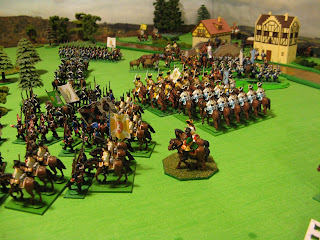 The Monrovian hussars hold off the Ducal cuirassiers allowing more units to cross the river; but they eventually break and are pursued. The Ducal dragoons round up the Monrovian infantry by the woods who have surrendered. A second regiment of The Ducal dragoons try to charge the bridge but falter in the face of musket and artillery fire ... 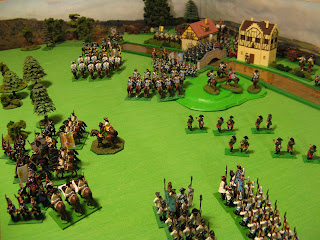 Just as the last regiment of Monrovian infantry cross the bridge; there is a large explosion and bridge is left in ruins (the Monrovian engineers has been busy and mined the bridge); the remainder of their cavalry manage to swim across the river.
The Ducal forces fall back as they cannot get across the river. Their commander is satisfied having beaten the enemy, captured 3 regimental infantry colours and further weakened the Monrovian cavalty.
The other half of the Duical force in pursuit lost contact with the Monrovians in the forest, enabling the Monrovian column rearguard to find their way across the river to rejoin with the main body of their army.
Posted by tidders2 at 07:05 5 comments: