Wittenberg: New General Staff (and some other refurb's)

Refurbishment and tidy up are necessary some times, I've been working on the Wittenberg general staff, but a couple of other units needed some attention as well - some cavalry and some grenadiers.  Some piccies below plus the new general staff.

1. Cavalry: Chevaux-Legers
One of my Chevaux-Legers regiments was made up of Old Glory Fitz-James horse (JBH-10), but with three horse grenadiers using some spare Irregular Miniature riders on Minifig horses - these have never quite looked right and I thought it was about time to sort them out 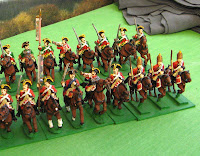 Also I noticed that when I painted them I hadn't removed some of the grass 'support' pegs for the horses feet, 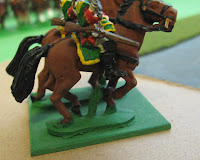 these are a bit clunky and once removed made the horses look a lot better. I bought some more Old Glory cavalry figures and painted up three to replace the horse grenadiers - I decided to re-base both regiments as the old bases had become a bit tired.  Chevaux-Legers brigade ready for action ... 2. Infantry - Grenadiers
While I was in the 'refurb' mood,  I felt one of my battalion of grenadiers needed a bit of a lift. The figures have no cast detail on the front of the mitre which makes them look a bit flat... 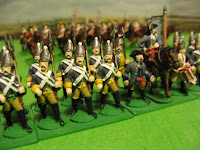 So I painted the front of the mitre black and added some outline detail in silver, much better .. 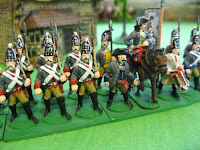 3. General Staff
The general staff are now finished, I really enjoyed painting up the Minden staff packs I bought ....

The command tent I made up a while back has been put on a display base with a couple of tents, the display base will sit overlooking my gaming table so the the staff can keep an eye on goings on. The new Minden figures fit in nicely with the rest of the staff .... 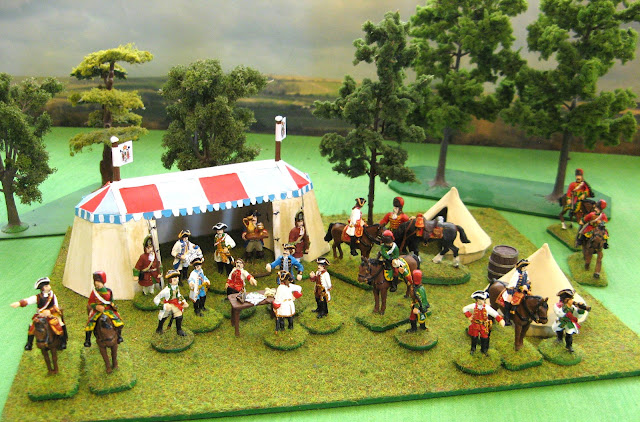 Beggars attempt to get some money off the passers by... 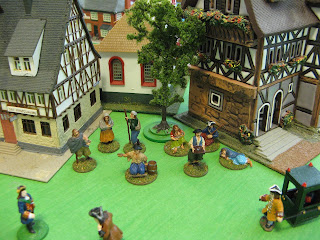 The King and Queen sometimes go for a stroll in the city (with a small guard), this morning they stop to give alms to the poor ... 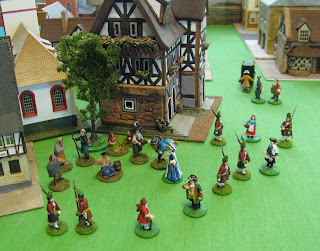 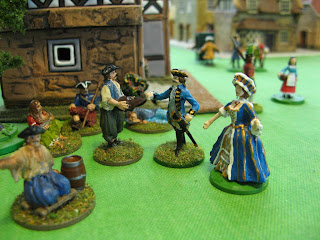 New chaps for the Palace ...

Some repainted staff figures to add to the crowd at the palace. Firstly a Minden and Old Glory figure... 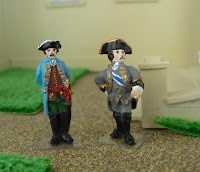 and a couple of Front Rank figures... 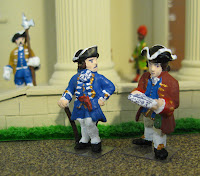 The Wittenberg general staff if being re-done and I've bought the Minden staff sets to be replacements; painting is in progress..
Posted by tidders2 at 11:36 2 comments:

The military attache to the Wittenberg ambassador to Russia, was offered the opportunity to sail with the Russian baltic fleet, here is the report he sent back to Wittenberg along with some watercolours of the main stages of the action ... 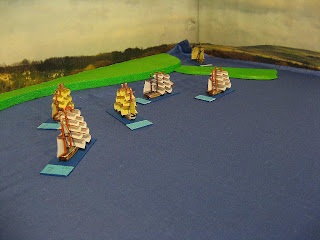 The Russian fleet move in .... 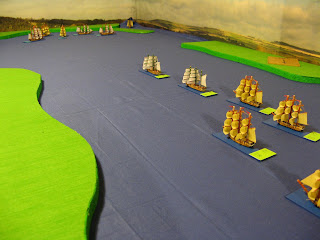 The Admiral in the flagship leads the 1st squadron into attack the Swedes.. 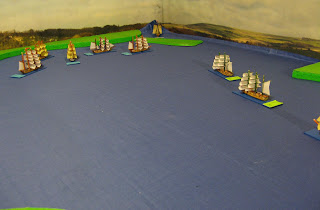 The Swedes scramble to get their ships into action as the Russians open fire ... 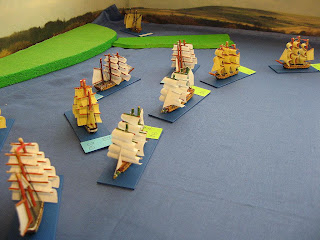 As broadsides are exchanged one of the Swedish ships catches fire (red marker) .. 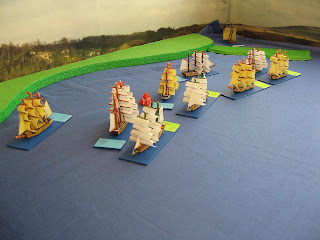 The Russians slowly pass by pounding the Swedes who give a good account of themselves; the crew of the ship which was on fire managed to put it out, but the ships rigging is shot to bits and is immoblised (green marker); another Swedish ship catches fire and lists heavily. The tail end Russian ship has had its rigging shot through and starts to drift on the wind .. 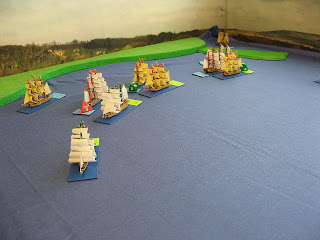 The Swedish ships are badly damaged now two are on fire and starting to sink with two more immobilised. The second Russian ship's rigging is badly damaged and is taken into to tow; one Swedish ship undamaged by the initial fighting closes in and pours in a broadside 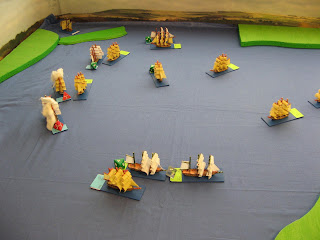 The Russian ship is badly damaged and slips it's tow and drifts into shore and starts to sink, the only  active Swedish ship bow rakes a Russian ship to little effect as it tries to get clear ... 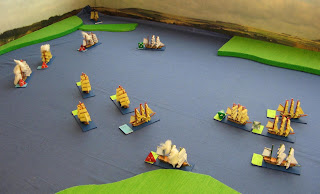 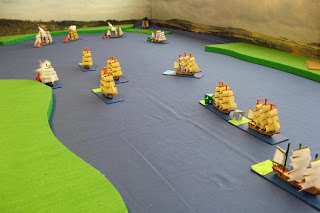 A great victory for the Russians

3. Ships : these are sourced from Matlock Miniatures and have been slightly modified by using ship sides from Junior General to provide more hull detail.