It didn't really fit in when used as bottom part is way out of scale for 28mm figures - it was usually relegated to the background. 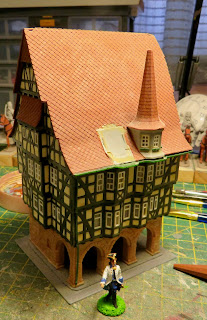 The roof surface smoothed and covered with thin cardboard, new ground floor shell was made from thicker cardboard. Tile plus stone effect paper sheets used along with some printed doors and windows - it now looks the biz :) 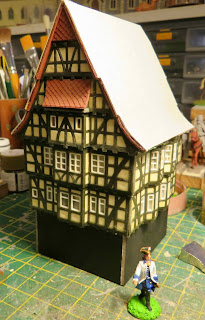 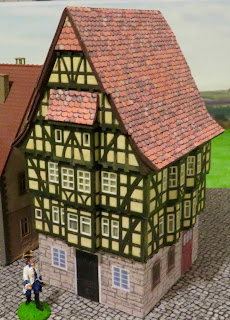 Never have been satisfied with the chimney, repainted it grey and added some chimney pots to the top. Also to spruce it up a bit I put some stone effect paper on the sides and back. 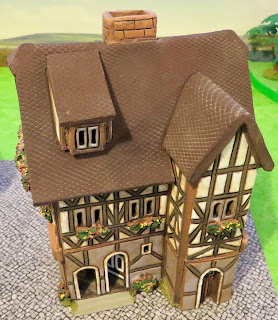 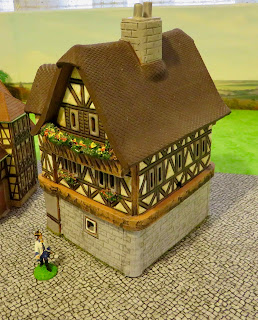 I thought I'd have a go at an item from the from the Petite Properties 1/48th range ; I picked a smaller one called Tinkers Alley, I made it up but didn't use all the detailing pieces - I added some timbering to the front and back to fit in with my other buildings 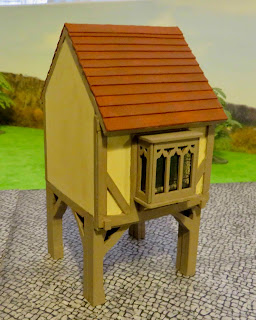 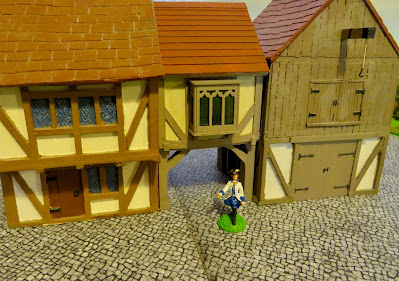 The re-equipped Dragoon regiment - they have been brought back up to full strength after the rigours of the last Begovian campaign. 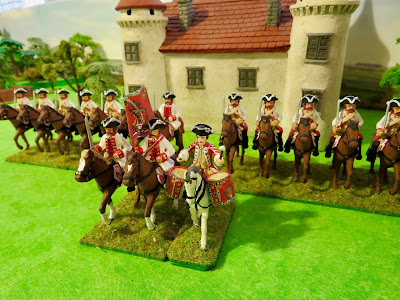 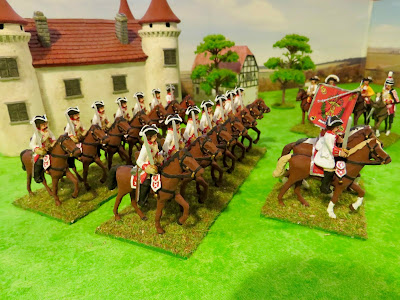 [figures - my own 40mm home-casts, Kettle drummer is a conversion of a home-cast Creartec figure]
Posted by tidders at 04:54 3 comments:

General Waldebeck has organised an intelligence gathering information on the current positions of the Begovian army; they appear to be in camp across the border about 20 miles or so south west of the border town of Darkur.  A number of small units of scouts have been sent across the border ...

One of these heads towards the border with Begovia .. 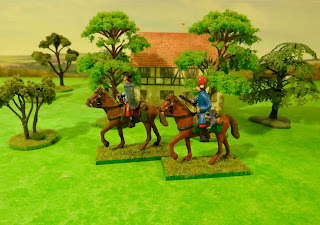 they crossed the border and about five miles ducked into a copse to keep out of sight of a Begovian patrol.. 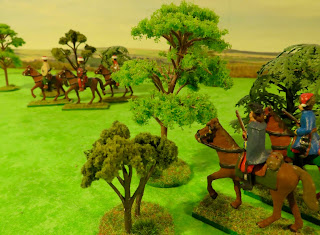 taking care they headed further into enemy territory after another 15 miles they could see a group of Begovian encampments in the distance ; they approached carefully and found some cover to observe one of them .. 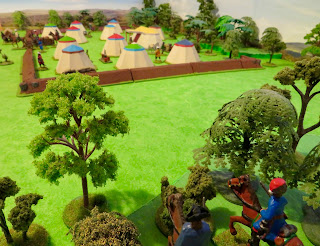 they circled round and through a wood to get a bit closer ... 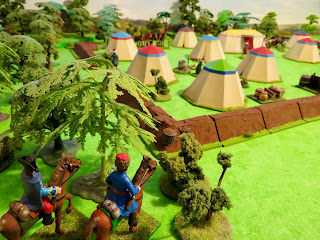 after that they headed back to Wittenberg territory, passing by another camp and avoiding another patrol 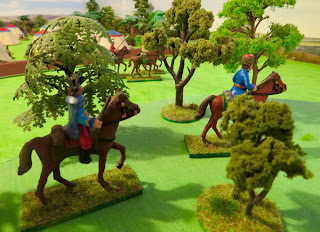 a bit further on, they saw a body of horsemen approaching and took cover; they watched as a large group of Tartars passed by... 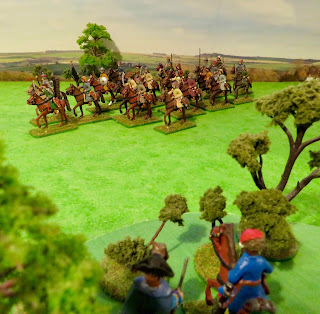 They hurried back across to the border and then on to the army HQ to make their report; the positions of the camps were noted and placed on the maps, but the presence of Tatars allied with the Begovians was important information ...

Camp for the Begovians (WIP)

I've been making tents for the Begovians to be used to represent a camp; made up a template.. Initial prototype build... 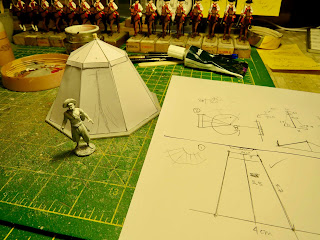 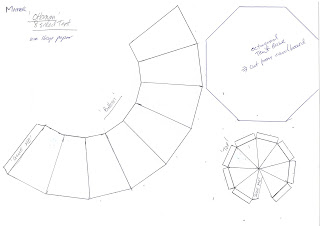 I used the template to make up a number of tents. To make a commanders tent I used a tent template cut in half and with fill in-between; using a cardboard internal frame for rigidity 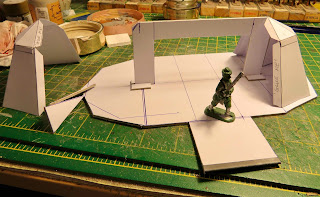 Have enough tents for a good size camp ... 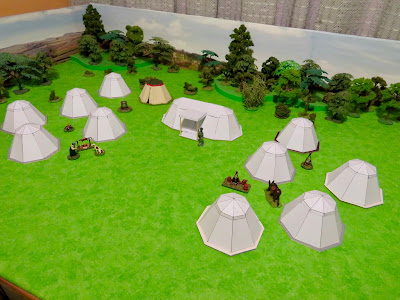 will get these painted; I have cast a few figures up to convert to add some interest to the camp scene as well
Posted by tidders at 06:24 2 comments:

Making the large chamber for Under Wittenberg....

I needed a large chamber for the Under Wittenberg game. I decided to use a box folder and make it as adaptable as possible.

I removed one side of the box folder to make photography easier during games. I cut some coffee stirrers to size and fixed them near the corners to provide a groove at each end to fit swappable wall effect pieces. 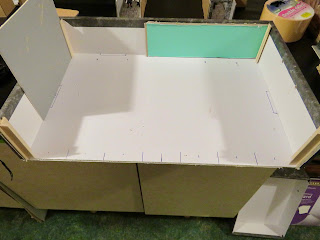 The cardboard inserts for the wall sides cut, covered in stone paper and checked for a good fit 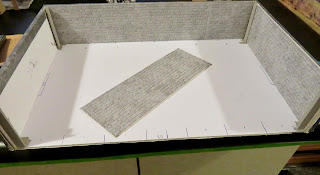 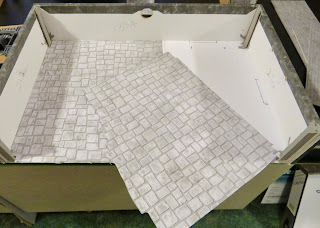 Flooring paper stuck down and wall inserts in position - rather empty, perhaps a bit larger than was needed. I can add internal walls for a later game, along with different wall pieces. 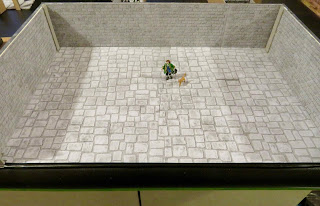 A little bit of dressing to check on how pictures would look.. 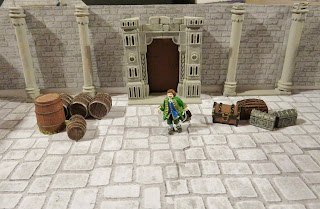 In use as part of the Under Wittenberg game.... 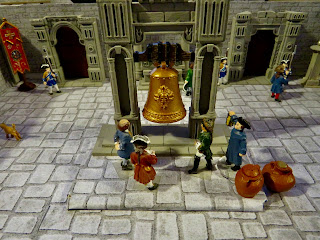 the two doorways and the bell came from a free sprue with a Warhammer Age of Sigmar magazine  that I spotted in a newsagent (not my usual purchase to read, but the free sprue had some really useful bits on it).
Posted by tidders at 07:40 5 comments:

Basically I have a selection to choose from depending on the size and content of the scenario.  I always tailor rules to a scenario if needed. Apart from the main rules set I use below,  I make up scenario specific rules and borrow bits from other rulesets as appropriate.

Big Battles - I use Weight of Fire ruleset (a free set I downloaded some years back) with a few of my own tweaks (rules PDF here, quick ref sheet here side 1 and side 2)

Adventure Games - A general set useable for 17C onwards.  (PDF here) It was derived from the rules included in Battlegames Zulu Special (BG14), I made a few basic adaptations (and a few more minor ones) main changes to the published rules as follows

The Skirmish Riles Lite and the general Adventure game set are sort of close in content and I ought to converge them to make one set. (one day 😉 ).

The Under Wittenberg Game
This was the last solo game played.  Very ad-hoc game. Basically a test of the concept of splitting the game table into two halves, one being the above ground and the other underground. The passageways and chambers were added as I went along and the story developed. Some new pieces were made - steps, the pit, the large chamber along with some doorways and 'treasure pieces'.
Posted by tidders at 07:00 5 comments: