Wittenberg - A Visit to the Menagerie

Relaxing from the affairs of state the King meets the latest addition to his menagerie - an indian elephant; the old barn has been pressed into service as an elephant house .. 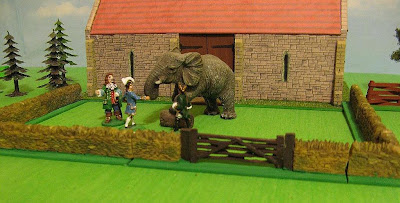 Meanwhile the rest of the royal family, with the visiting Duke of Fenwick and his wife, go to see Humphrey the dromedary and Harriet the hippo.

The whereabouts of Larry the lama is still a mystery, let loose as a prank in the palace it got out into the grounds; although seen a couple of times it has so far eluded re-capture.
[I've gone completely bonkers, I'm playing zoos - isn't this imagi-nations stuff fun !]
Posted by old-tidders at 00:57 4 comments:

Report on The Army of the Duchy of Fenwick

A report to his majesty King Leopold IV from his ambassador to Fenwick.

Fenwick is a heavily populated Dukedom, with plenty of manpower to call upon for the army. The army currently comprises:

All the troops are of good quality, most of them being veterans (a large number of them having served as mercenary troops for other nations). They are mostly attired in red coated uniforms with a variety of facing colours.

The Duke has recalled all his troops on foreign service, having paid the contract cancellation fees. He has however retained his commitment to provide for the garrisoning of Tippelbruder, which comprises 1 Battalion of infantry and 1 battery of artillery.

In addition to the above forces there is the Wittenberg Legion, which has currently finished muster. It's service uniforms are being delivered shortly. The Legion comprises: 2 battalions of infantry, 1 regiment of dragoons and 1 battery of artillery. The Duke has stated that as soon as it is ready the Legion will march to take up its initial positions in our province of Lower Belgravia at the border town of Gugenstadt.

The Duke has informed me that the army is currently deployed to counter any potential threat from Stagonia. The forts along the border with Monrovia are fully garrisoned and provisioned.

A quick note on where I've sourced my 25/28mm 18C civilians, these are from a number of ranges -

Other possibles are:
- Foundry is also worth a look, I've been tempted but restrained myself so far.
- The Perry AWI range has some that may also be useful (?AW73).
- Tradition Scandinavia 30mm Willie series, you can see these on the Traditon of London website (http://www.traditionoflondon.com/), follow link to 'Other Brand 30, 54, 90'.
Posted by old-tidders at 12:27 4 comments:

Prince Maurice of Fenwick is visting Wittenberg. King Leopold IV, Prince Maurice and Count Hermann of Munster are in the palace grounds ... 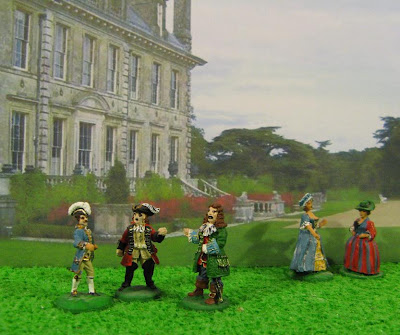 King: How are things on the border with Stagonia.
Prince Maurice: Very quiet, the patrols have reported nothing. Since the accession of their vile new monarch we haven't seen much military activity at all. Our army is now fully mustered, the border forts are fully garrisoned and supplied.
King: Count dow we have any progress on those mysterious documents ?
Count: Yes, a small step forward with the decipherment. Cantor of the royal society believes that the first line under the phoenix is a latin motto - he's putting all his efforts into that at the moment. Brother James is still sifting through his abbey's archives to find out more about the Sect of the Phoenix. Apparently the it goes back to medieval times - its on the Catholic churches 'banned list', any known members are to be excommunicated.
Prince Maurice: Have you identified the man who was killed ?
Count: We have a name, a certain Count Revolvendors rented the coach in Wittenberg to take him to the Monrovian border. The coachman was badly beaten up and left for dead - he regained consciousness yesterday and we managed to get a brief description of the attackers.
King: Well, what did they look like ?
Count: They were dressed in black and had on black cloaks, he didn't see much.
King: This is very worrying, the remains of the man who we think blew up the gunpowder store at Heidelheim had a black cloak as well. You don't think Milady de Winter's Regulators are at work ??
Count: I certainly hope not. I've had no information from my spy network that they are in the area.
Prince Maurice: Was it that notorius highwayman, Black Jack Davy ?
Count: Not his style, he doesn't usually kill anyone and besides the wound was precise - a sword or kife wound to the heart. I suspect this was a murder to order, by persons unknown.
King: Donutz ! Donutz ! Where is my butler ? Donutz !
Donutz: You called your majesty.
King: We will take tea with the ladies in the grotto in half an hour, please get things arranged. Oh and bring me my wide brimmed hat it's starting to get sunny.
Donutz: Yes your majesty ..

The new garrison commander of Heidelheim, General von Stoltz travelling with his daughter, is stopped by the infamous highwayman Black Jack Davy and his 'associates' ...

Black Jack: that's as maybe but you'll have to catch me first. Now then lets see what you've got ... Are you General Stoltz ? Were you wounded at Hummelsdorf ?

General: Yes - Whats that to you ?

Black Jack: I remember that battle; horrible it was - the musket fire from those Monrovians was like hellfire.

General: You were there then ?

Black Jack: Aye I was; I was an officer in the 10th infantry regiment - it was you who pulled me back to the rear was I was injured, looks like you got shot up bad after that.

General: I remember pulling back a badly wounded young officer. You survived then, you seem to have fallen on hard times?

Black Jack: Not so bad, I make a good living. Alright men leave them be; we'll just take 10 thalers as a toll ..

New pack-mules for the baggage train

After a rummage in charity shop I found a bag of toy animals, spotting some decent looking horses for possible uses with my 40mm figs, I bought it for the princely sum of £1.50. After sorting through the bag I had 4 horses and a donkey for my 40mm, plus 2 mules just right for my 25/28mm collection.

Out came the green stuff and an oddment from my spares, to create the mules with loads .. 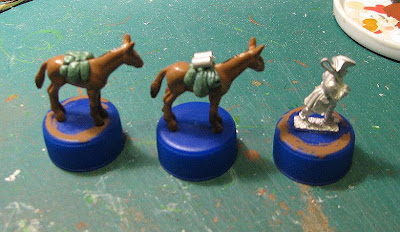 Finally the mules all painted up ... 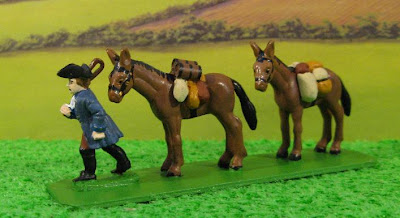 The artillery have just received their new standard (I used the Saxony SYW artillery standard). I also thought they needed a drummer too. 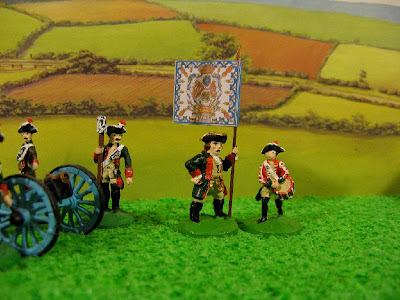