King Francis I of Monrovia has been discussing the situation of the army in Zomverre with his military advisors. Since the defeat at Pomeroy and the narrowly averted destruction of the army at Dornitz there had been much talk in court circles. The King was told of the current state of the army, supply problems, difficulties with communications and the poor weather. They also told him of the strength of opposition and the involvement of hired troops from the Duchy of Fenwick. None of the advisors would make a clear statement on the course of action to take next.

The King sat in his chair and thought for a while.. He then stood up and said:
King: Count Malpurgo Belladona
Count: Yes your majesty ?
King: Count, you will take control of the army in the field, you are now the Field Marshal, you will relieve Stricknein of his command. Bring the army back.
Count: Yes sire ... 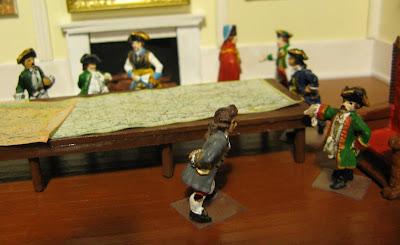 Get them home !
King Francis spent a fretful evening worrying about the army; unable to sleep he donned his favourite suit of medieval armour and wandered the royal apartments ...
Posted by tidders2 at 10:36