I'm having a sort out with my artillery for 40mm; initially I've cast two limber sets up from NZ molds and bought two new guns from the Sash & Sabre SYW range. I find the NZ mold wheels difficult to cast so I've used some small Lego plastic spoked wheels instead. I've swapped the NZ limber horse rider heads with some from Sash & Sabre. 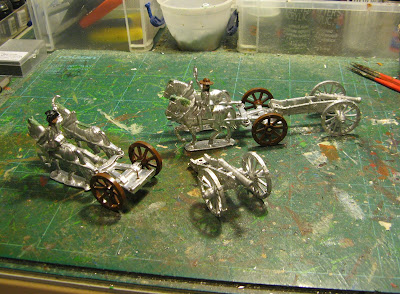 The two new guns and one limber set will go to the Wittenberg forces; the other limber set plus one of my spare guns and some crew which are on order, will be for Hesse-Limburger allied artillery contingent to Saxe-Jarlsberg.
Posted by tidders2 at 03:18