The Queen has found a new animal for the menagerie (after some negotiation with the Hispanic ambassador), it has recently arrived. To distract the King from his worries about the war in the Duchy of Zomverre the Queen has taken him out into the grounds to see the new arrival.


King: How delightful, another llama; a lovely white one - what it's name ?
Queen: Her name is Lucy
King: I'm sure having a companion will cheer up Larry, he's been a bit mopey of late .. 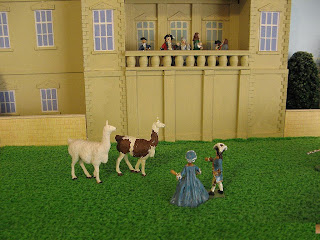 Two men in the balcony were having a rather heated argument 'Don't push me or I'll pull you' one said, the other replied 'I like to see that, you can do little to me'; After they calmed down one of the ladies seeing the Llamas was heard to remark 'I've never seen anything like it in my life !'
Larry shows Lucy around the gardens and grounds of the palace 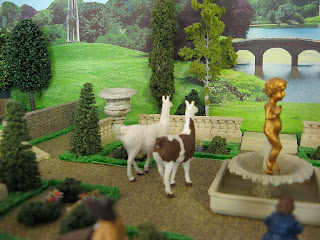 In a quite moment when there is no one around Larry and Lucy kiss .... 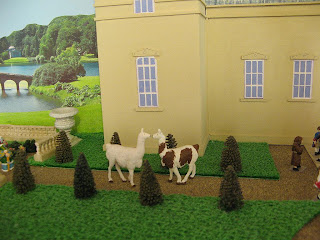 It looks like they'll be happy together ..
Posted by tidders2 at 12:14