The KIng gets a Surprise ...

Newly completed palace room....Previously on this story line
part1 who' takinging pot shots
part2 count herman waits for a guest
-----oXo-----
Scene: the King is visiting Count Hermann at his country estate. The King and the Count have been discussing affairs of state and have gone to the drawing room to relax and unwind ... 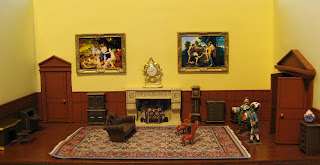 A short while later they are joined by the young Mademoiselle De Givanchy (a singer who has performed in many of the courts of Europa) and her aunt the Marquise of Zinzendorf, both of whom are in the service of Count Hermann (the spy service that is) 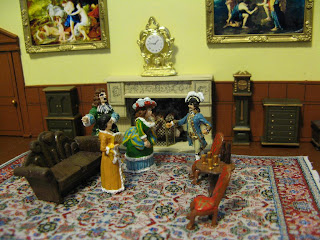 The King is looking rather speculatively at the Marquise, after a short while he says .. 'Marquise do I know you from somewhere ? You look familiar'
The Marquise and the Count exchange glances and the Count nods. The Marquise hesitates and before answering carefully removes her and and wig and says in a man's voice 'Von Lessing at your service your majesty'  bowing rther awkwardly.
The King rather taken a back, exclaims HA ! I kew I recognised you from somewhere and starts to smile. He then turns to the Count and asks rather stermly  'Has he been behaving himself ? to which the Count replies 'Yes, he has done great service for our country to date, he recently disposed of the Count des Armes for us'.
The King turns and looks at Von Lessing and bursts out laughing, unable to contain himself he sits down onto the sofa. After he has calmed down and had a glass of sherry he asks the Count where he go the idea for Von Lessing's undercover disguise. The Count tells him of the time he spent at the Russian court and his meeting with the remarkable Chevalier d'Éon.
They all settled down comfortably while King heard of the latest information 'the ladies' had gleaned during their last visit to Stagonia...
----oXo----
Note: To find out how Von Lessing ended up in the service of Count Hermann, see - Difficult Choices
Posted by tidders2 at 04:07