[previous installment at
http://tidders-kingdomofwittenberg.blogspot.com/2009/06/1740-across-river-oudear-3rd-belgravian.html]
---oXo---
Elements of the Wittenberg army have crossed the River Oudear at Ingelwitz, and are marching south-west down stream to Vanderhof - their intentention to block the Monrovians river crossing point, cross the river there and effectively surround them. 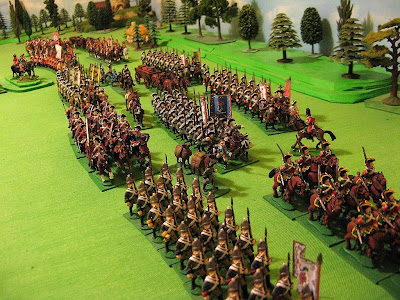 The Boldovian army corps has made good progress on its march. The King and Field
Marshall pause on a small knoll to watch the troops marching past ... 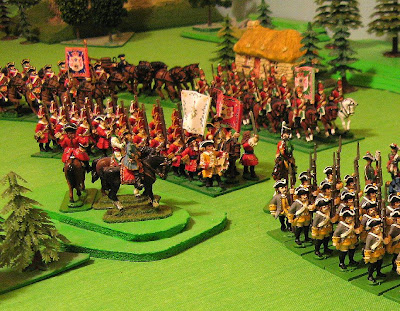 The King and Field Marshall are in discussion ...
King Leopold: How much further to Vanderhof ?
Field Marshall: Less than a day's march your majesty, the advance guard is half a days march from Vanderhof, I have had reports from scouts that the place is only garrisoned by Saxe-Jarlsberg militia.
King Leopold: Do the army corps facing the Monrovians have enough supplies ?
Field Marshall: Yes, the Wittenland and Guard Corps can stay in the field another week, after that they'll have to fall back to Ottenheim and Hausdorf. I have just received dispatches from our reserve corps that they are in north of Hausdorf on the other side of the hills - they are protecting the armies rear.
italic - The distant rumble of cannon fire from the north interrupted their conversation
Field Marshall: Sounds like the our troops to the north are dancing with the Monrovians.
King Leopold: Onwards then ...
---oXo---
To Be Continued ...
Posted by tidders2 at 01:26