The King is briefed on the current situation

(my generic palace interior room, gets a new setup and some high ranking visitors)

The King, Count Munster and his secretary leave the royal appartments and cross the great hall. On his way through the King pauses to ask Brother James to supervise the packing and storage of the books in the library (which is about to be refurbished). 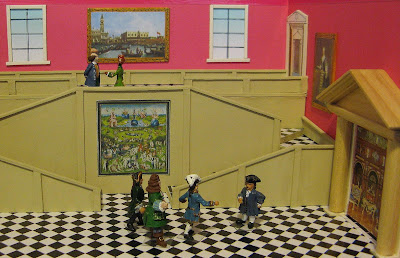 The King makes his way to the meeting room via the short gallery ... 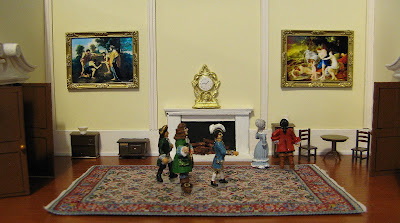 The king arrives in the meeting room, the general staff have the maps laid out ready, 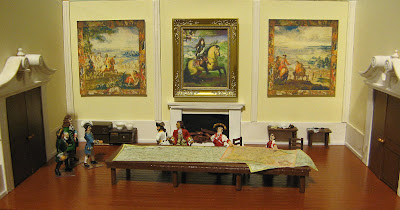 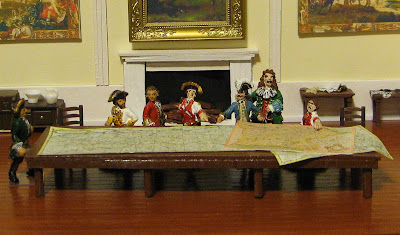 General Brendinski: Welcome Your Majesty, we will bring you up to date on the current situation.
King Leopold: Firstly I want to know the status of the mobilisation of the army.
General Brendinski: The Boldavian army corps is fully mobilized and they are in their forward positions in Upper Belgravia. The Wittenland corps is continuing to muster, no more units are ready for action than last month. Guard Corps - only the Gardes Suisses are ready. We are being hampered by a shortage of cavalry mounts for the heavy cavalry - it would appear they are being bought up in large numbers by Prussia, Gallia and the Imperium.
King Leopold: What about the Monrovian army ?
Count Herman Munster: From our intelligence it would appear that only their Army of the East in mobilized and in position in Lower Belgravia; their Army of the North has not yet started to muster. They seem to have moved some troops from their Army of the West towards their south-west border - they seem to be making threatening moves towards Verre, Else and Noverre in an attempt to get them to sign treaties of alliance.
King Leopold: What about the Saxe-Jarlsberg border disturbances ?
General von Alpneck: Their have been a number of tit-for-tat raids across the border; so far Saxe-Jarlsberg seem to have the advantage. Troops in the border region are commanded by General Waldebeck and he has asked for re-inforcements. We are arranging for the rest of the Boritzy Freikorps to move south and also some regular troops as well. The Kings Jager Company was dispatched last week and has already helped with the destruction of one of the larger bands of brigands in the area.
King Leopold: Thankyou gentlemen, I have pressing business to attend to. A new consignment of hats for my collection has arrived and they need cataloguing.
Posted by old-tidders at 11:44