I completed the initial mould for the 28mm figures I had sculpted and did a trial casting session today .. 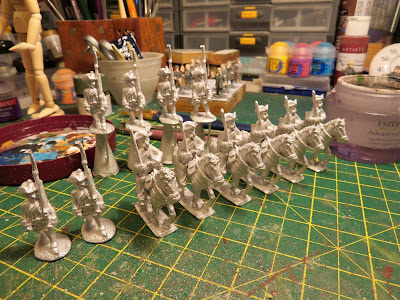 in general coming out nicely,  the dragoons sword doesn't cast quite right occasionally - but easily fixed with some green stuff. I'm planning to do one more 28mm mould - 3 march attack musketeers and a grenadier, so I can cast infantry units quickly. I'll use my castings for rank and file and buy in the command figures and musicians.
The 'plan' is to use my home-casts to complete the Duchy of Fenwick army and in the long-term  re-furbish some of the Monrovian and Wittenberg army units.
Posted by tidders at 11:55