a summary of the scenario I used for the raid on Konigsweldt ...

Wittenberg has been fighting an intermittent border war for a few years with Saxe-Jarlsberg, their allies Hesse-Limburger are assembling reinforcements to move up-river. An attack on their camp has been planned - their supplies must be destroyed and as many casulaties inflicted on their troops as possible. 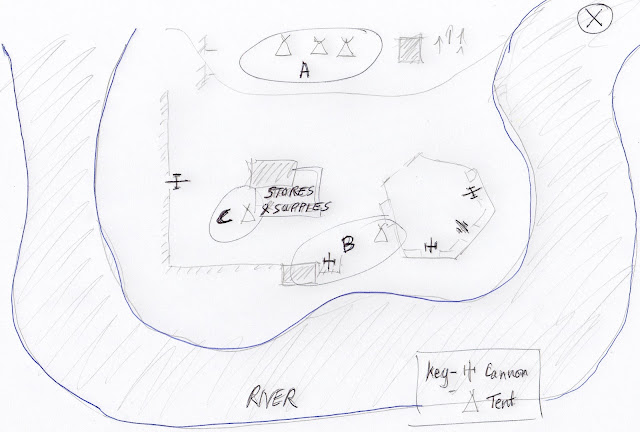 Forces:
1 battalion Fusiliers  (at A)
1 battalion Musketeers (at B)
1/2 Grenadier Battalion (at C)
1 company Jagers (at A)
Artillery: 5 cannons, (as shown on map above)

Briefing: Your forces are assembling in camp awaiting transport up-river. A large stockpile of supplies has been stored there as well. In the event of an attack it is your duty to ensure that the supplies are not destroyed. It is early in the morning and your troops are dispersed in their tents etc; sentries and look outs are posted.

Briefing: Your must land your forces and disperse the defenders and destroy the supply stockpile. After destroying the supplies you must re-embark your force and return to base. Your flotilla enters at start position X; you may have one third of your force deployed further down the river.

Attackers win if they: destroy more than 60% of the stores and inflict more than 25% casualties on the defenders and lose no more than 50% casualties.

It takes one full move to set charges, on the next move the effect of blowing the charges can be assessed - damage to supplies is assessed using percentage dice.
Posted by tidders2 at 11:07