The following scenario of a rearguard action was used as a play test of the "Weight of Fire" rules to see how suitable they were - generally found to be good but a couple of 'house amendments' are under discussion.

Further extracts from the History of Wittenberg by Brother James of Alt-Wittendorf (this time with illustrations) ...


King Leopold III of Wittenberg started to set his withdrawal from Hummelsdorf in motion. As the light faded the cavalry which had gone of in pursuit of the Monrovians returned - the first few regiments were in a sorry state followed by the two Guard Kuirassier regiments. The rest of retiring army perked up as they heard the band of the guard horse regiments playing. The Wittenberg army set off down the Dorf valley, the King placing the cavalry on the flanks of the main body of the army. He sent a pulk of Uhlans ahead to the river crossing to contact the garrison at the fort on the Wittenberg side of the river. The main body of the army was commanded by Field Marshal Duke Frederick of Wittenbuffel. The King was surprised as his army slipped away that the Monrovians were inactive. He waited for while then set off after the main body with the rearguard.

The Monrovian generals were slow to act and were concerned about where the Wittenberg Cavalry had got to. After a while they decided to wait till the next morning before they made a
decision. The next day came and the Monrovians found that the Wittenberg army had slipped away during the night. After a council of war a small pursuit force was despatched under the command of Count Douglas. The generals expected the rest of the army would be ready to march in about a day.

3) Battle is Joined at Boltsdorf

Two days later the Monrovians came into to contact with some Wittenberg Dragoon pickets. The pickets withdrew and rejoined the Wittenberg rearguard. The king turned his forces and formed up for battle. The Monrovians march ... 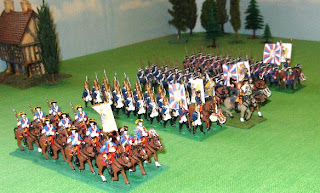 The Wittenberg rearguard has turned and starts to move ... 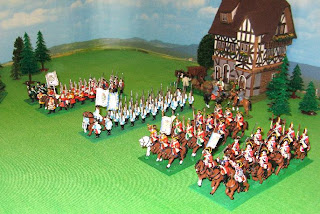 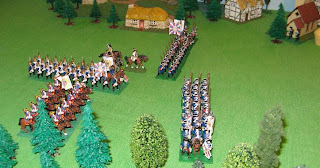 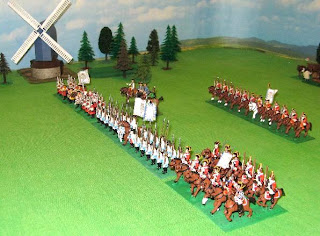 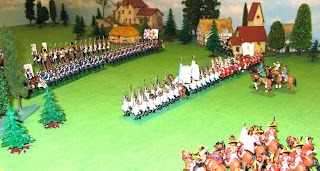 The front two Monrovian infantry regiments attempt to charge - a loud but ineffective volley form the Wittenberg infantry cause the Monrovians to loose there nerve and they turn tail ... 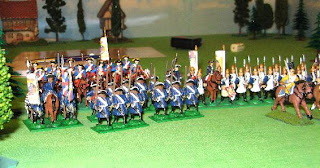 The remaining Monrovian fusilier battalion is disorganised and shaken and not willing to move. The King of Wittenberg starts to manouvre to take advantange of his superiority in cavalry. . .

An out of breath hussar courier arrives with a message for the king - "the Army has reached the river crossing and the Field Marshall has despatched two pulks of Uhlans to help cover the withdrawal of the rearguard. The Uhlans are not far behind me".
The king decides to withdraw the rearguard, as his foot guards have suffered heavy casualties. The Monrovians hold their position and Count Douglas tries to rally his troops.
Posted by old-tidders at 09:55