The Monrovian forces invading Zomeverre having secured their position in the Vergessen valley continue their ponderous advance. They have reach the old walled burgh town of Hohenloe, the garrison of the city left the day before the arrival of the Monrovians taking a all spare supplies to the ducal army mustering in the north.

General Stricknein summons the town to surrender on pain of storm 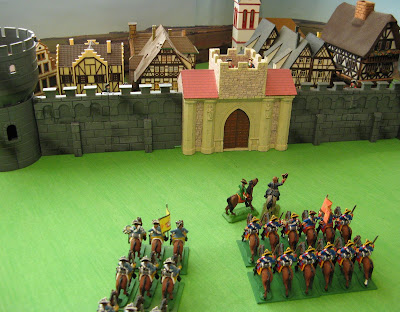 the burgomaster agrees - not wanting to see the town ruined - the gates are opened ...
General von Messing commanding the Ducal forces is awaiting re-inforcements from the Duchy of Fenwick before he moves against the Monrovians.
Posted by tidders2 at 03:53