A couple of weeks ago I bought a toy castle at a 'car boot' sale; it was rather large and more suitable for 54mm+ figures. I sorted through all the pieces and kept the most usable bits - 4 towers, nine wall sections and a rather large sort of keep.   I've been sorting out how to use these bits today and decided to remove the bottom section of the towers and lower the wall sections pairing them together to give me 4 longer sections. The initial cut and bash can be seen here with a gatehouse made from another toy. The figures shown are from my 40mm ECW collection, at a push 28mm figs wouldn't look too out of scale. 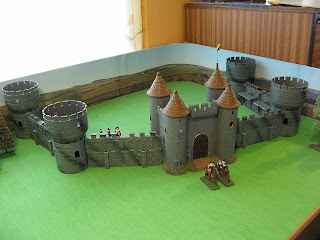 It looks good as a town wall or even re-arranged to make a small castle. I used the remnants of the walls and the bits from the keep building to make the basic shells of two buildings - a large manor house and a chapel with circular apse (again a 40mm fig shown for size comparison). 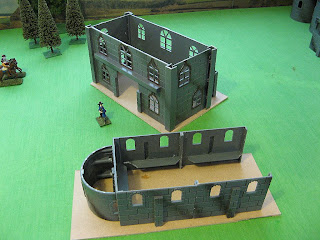