Well the original planned units for Wittenberg and Monrovia are now all finished; the planned size was:

Wittenberg has two extra cavalry regiments, that are going to form part of their next army corps. Lots of things to add yet, plus lots of potential for future gaming.

It's taken me 2 years and seven months to obtain and paint all those units. It would have taken less time but I have been working on other gaming projects - the main diversion being ECW. The journey to this point started properly in June 2006, when I started my online wargame diary recording my progress. I moved to blogland in March 2007, enabling me to reach and interact with the wider net-community.

One of my favourite 'vignettes' from my previous posts ... 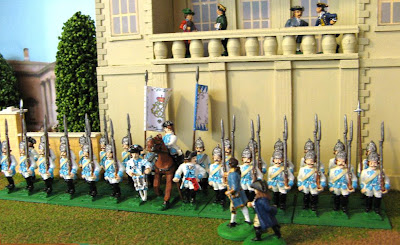 King Leopold IV and his son Prince Wilhelm review the Wittenland fusiliers
Its been great watching the steady increase in the number of Imagi-Nations, with their goings on, interacting via EvE.

Finally a short message from the King Leopold of Wittenberg -
"Greetings and felicitations - may your nation prosper and be victorious on the battlefield".
--oxo--
I better get on and hold the Wittenberg Boldavian army corps review, hopefully the next post.