The Monrovian army carefully extricated from Zomeverre by Fied Marshal Belladonna had been dispersed back to its cantonments. In the capital the Regiment de la Reine and the Grenadier guards had returned. The King and Queen had been down to see the returning troops only to be saddened by the state of the remnants of the Grenadier guards reduced to barely one company and without their standards (lost at their heroic stand to hold the flank at the battle of Dornitz).

After spending a rather melancholic evening King Francis sank into depression and donned his favourite suit of armour ... 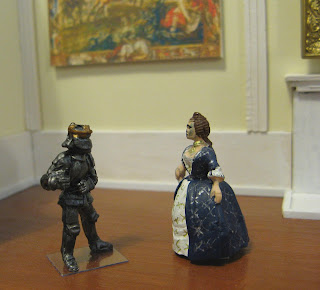