Scene: King Leopold and Count Herman Munster are in the library discussing the latest pamphlets circulating in the capital ... 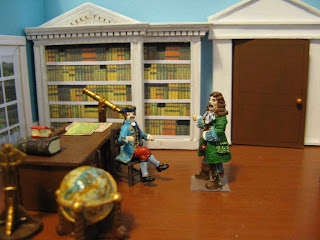 Count:That dratted Jacob Braun who lampoons your majesty and the court has received a Stylish Pampleteer award.

King :I thought the last one 'The King loves llamas' was most amusing; his series 'Liasons Secretes dans Le Palais' was most entertaining

Count: In his latest pamphlet 'Is Munster a Monster ?' he acknowledges his nomination from Johaness Winkleman (and others), Winkleman is the the author of the popular pamplet series 'Journals of a Gigolo'.

King: You sound a little peeved Count, do you find that pamplet about you a little irritating.

Count: Yes rather. In the pamplet he has made seven statements about himself

King: What are they ?

Count: He writes :
- I have wooden false teeth
- I married a lady of distinction
- My favouriate colour is indigo
- I am a follower of the great preacher reverend Wilhelm Teller
- In my youth I sang in the cathedral choir at Salzburg
- I hold a doctorate in metaphysics, obtained while studying at Gottingen
- I have large collection of quill pens

King: That information could be useful to you, you may be able identify him and arrest him

Count: I doubt some of it is true, good idea though. He's also nominated some others for the Stylish Pampleteer award

King: Which ones are they - might have to get copies of them for a read if they sound interesting

A messenger arrives, interrupting the Count ...

Messenger: My pardon your majesty a message from the Field Marshal, Monrovia has invaded Zomverre

Count: Not expected at all, our intelligence implied they were to move against us

King: Count, we best go down to see the Field Marshal in the map room to discuss the situation
Posted by tidders2 at 03:29