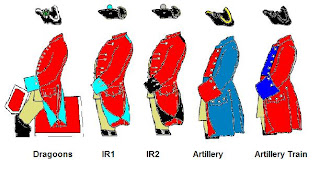 Recently a small force of the Army of the Duchy of Fenwick have been mustering, some say they are troops being raised for service elsewhere; they could be troops which are going to be sent to join the League against Stagonia in the defence of Freistadt Tippelbruder. However the force is bigger than that which had been promised - maybe some other country has requested mercenary troops.

The above uniforms are based on the Legion Brittanique of Hanover.